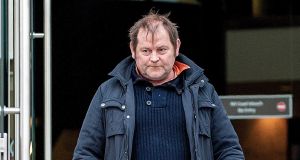 Documents and computer records found in the so-called safe house where the suspected leader of the gang that has waged a campaign of intimidation and violence against executives at Quinn Industrial Holdings was hiding and where he died yesterday are due to be analysed to determine his wealth and criminal associates.

Cyril McGuinness (54), who was known as “Dublin Jimmy”, died of an apparent heart attack when Derbyshire police at 7.30am raided the property he was staying in in Buxton.

Gardaí and the PSNI believe McGuinness, a Dubliner who was based in Co Fermanagh, was the leader of a criminal gang that has waged a campaign of intimidation and violence against executives at QIH in recent years. That campaign included the abduction and torture of Kevin Lunney in September.

The QIH executive team believe the men perpetrating the violence are taking orders from, and being funded by, a suspect they call “the paymaster” whose aim, the executives believe, is to drive them out of the company.

The documents, laptops, phones and other devices found at the Buxton address will now be checked to establish who McGuinness had been in contact with and if he was in receipt of unexplained payments and, if so, from whom.

Security sources said McGuinness believed his location was completely unknown to law enforcement, and because of that he had taken the records with him, in a bid to conceal them from the Garda and PSNI.

The raid at the Buxton property was one of 18 searches carried out in Ireland and Britain yesterday as part of the investigation into the abduction of Mr Lunney, a 50-year-old father of six and chief operations officer at QIH.

In the North five locations were searched, including properties linked to McGuinness in Co Fermanagh and some of his close associates. The searches in the different jurisdictions centred on private residences and business premises, including yards and industrial sheds.

QIH welcomed the joint investigative effort by the Garda, the PSNI and Derbyshire Constabulary.

As well as the raids yesterday, the Garda and PSNI also signed off on the creation of a joint investigation team, under the Eurojust police co-operation agency, into the attack on Mr Lunney and all of the related threats and violence as far back as 2012.

Garda Commissioner Drew Harris said the joint investigation team, the first of its kind between the Garda and PSNI, would allow for greater co-operation between the two police forces and also the prosecution authorities.

“We want to be seen to act in a strong and robust way, to show that there’s no room for criminality anywhere on the island of Ireland,” said Mr Harris.

QIH chairman Adrian Barden said that while the company was relieved at the series of co-ordinated police raids after years of inaction, it wanted to see arrests and the paymaster behind the long-running campaign of intimidation and attacks caught.

“It is one thing getting the people that have done the activity but it is more important to find out who has been paying for it because they would not have done it on their own volition.”

Mr Barden said the intimidation, vandalism and violence against the Cavan-Fermanagh company’s executives “feels like things you see from the Mafia or Peaky Blinders.”

The three US investment funds behind the business were “totally perplexed” why no arrests have been made in the investigation, said the Hampshire-based business.

They would consider closing the business, which employs more than 800 staff, if the violence continued and the owners could not guarantee the safety of their management and staff, he said.

“Whilst there has been a huge investment in this business, is it really worth a life? I don’t think any money is,” he said.