Ten people, including one bomber, were killed in fish shop explosion in 1993 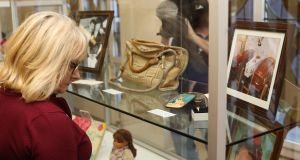 An exhibition to commemorate the victims of the Shankill bombing in the Methodist Church on the Shankill Road, Belfast. Photograph: Matt Bohill/Pacemaker

The families of the victims of the Shankill bomb are “still awaiting proper justice” as they mark the 25th anniversary of the IRA attack with a series of commemorative events.

Ten people, including two children and one of the bombers, were killed and 57 people were injured when the no-warning IRA device exploded in Frizzell’s fish shop on the Shankill Road in Belfast on Saturday, October 23rd, 1993.

Two IRA members, Thomas Begley and Sean Kelly, posing as delivery drivers, had carried the bomb into the busy shop. Begley died in the blast while Kelly was seriously injured. A getaway driver was never traced.

The IRA said the intended targets were UDA loyalist paramilitaries who they believed were meeting in an office above the shop. The office was empty at the time.

Charlie Butler, who lost relatives in the blast, said Kelly doing “a couple of years” in jail was not justice.

“Who drove them there, who made the bomb, who gave the orders?” he asked. “Maybe if we got those questions answered, maybe then things could settle a bit. We have moved on, we want to move on.”

The Shankill Road Methodist Church is hosting an exhibition of artefacts, cards and photographs relating to the bomb, and the Walk to Remember on Monday will visit the sites of a number of Troubles atrocities in the city.

A documentary exploring the life-long impact of the bomb, featuring survivors, relatives and emergency responders, will be broadcast on BBC1 at 10pm on Monday.

On the anniversary on Tuesday, a service at West Kirk Presbyterian Church will include readings by bereaved family members and a performance by a choir from local primary schools.

Flowers will also be laid at Court Credit Union at 1.06pm, the time the bomb exploded, and a bell will toll nine times to represent the nine victims.