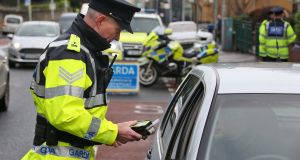 A Garda stops a motorist at a checkpoint. File photograph: Colin Keegan/Collins

There are large discrepancies in how often An Garda Síochána divisions are testing motorists for drug-driving, with some only carrying out a handful of tests in the last 18 months, new figures show.

Roadside tests for motorists suspected to be under the influence of drugs were introduced in April 2017, with plans to carry out 50,000 such tests a year, according to the procurement contract for the testing devices.

As of this month, less than 2,000 drug-driving roadside tests had been conducted by gardaí since the tests were introduced, with 259 motorists testing positive for intoxicants.

In the Cork City Garda Division, just four roadside drug-driving tests have been conducted, compared with 23,959 breath tests for alcohol over the same period.

The Louth division has carried out three tests, while Wicklow has carried out nine and Donegal 11. In the Mayo division, 12 drug-driving tests were conducted, compared with 13,764 breath tests.

The figures for the number of alcohol breathalyser and drug tests carried out at 101,965 Garda roadside checkpoints were obtained following parliamentary questions from Independents 4 Change TD Tommy Broughan. The Kildare division carried out 268 drug-driving tests, the highest number recorded across the 28 Garda divisions. Kildare recorded nearly twice as many breath tests as any other division, at more than 44,000, despite carrying out only slightly more checkpoints than the national average.

In total, 472,000 alcohol breath tests have been conducted at mandatory roadside checkpoints since April last year. The Garda figures show 2,699 motorists tested positive as over the legal alcohol limit.

The Dublin North Central Garda Division carried out the second-lowest number of alcohol breath tests, with 8,693 recorded, catching 39 motorists driving over the legal alcohol limit at checkpoints. The Sligo/Leitrim division recorded 31 motorists as failing breathalyser checks, from 8,196 tests, the lowest number in the country.

The drug-driving tests take a sample of saliva, and can test for the presence of cannabis, cocaine, heroin, morphine and benzodiazepines. Alternatively, gardaí can take motorists back to a Garda station where a blood sample is taken, which is then sent away to be tested.

The Donegal division did not catch any motorists under the influence of drugs at checkpoints, and Cork city and Wicklow only recorded one positive oral fluid test each.

The Drager DrugTest 5000 testing device can take up to 15 minutes to analyse a sample, and does not work below 4 degrees Celsius. In contrast, breath tests for alcohol take about three minutes, and as a result gardaí tend to use breathalysers rather than the drug-driving tests, Garda sources said.

Discrepancies between divisions were in part due to where training on how to use the tests was first rolled out, one source said.

Commenting on the figures, Mr Broughan said the low levels of drug-driving testing in certain areas was “concerning”. A review should be carried out into the use of the testing devices next April, two years after the initial rollout, he said. The review should also examine the level of training provided to gardaí for conducting the tests, he said.

Last year an internal Garda review of breath-testing found that between July 2009 and the end of 2016 the number of tests recorded as being carried out was overstated by 1.5 million.

The Garda Press Office did not respond to requests for comment on the drug-driving testing figures.