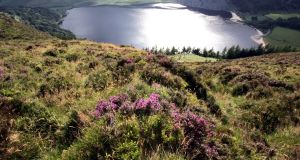 The future of the Wicklow Way will be in doubt if a €40,000 damages award to a hillwalker who fell on a wooden boardwalk that forms part of the trail is upheld, the High Court has been told.

Pat Mellon, rural recreation officer with Wicklow Partnership, said the popular 130km Wicklow Way could “disintegrate” if a Circuit Court ruling that the National Parks and Wildlife Service (NPWS), who placed the boardwalk on the lands, is liable.

Mr Mellon said other landowners whose property the Wicklow Way goes through were concerned about the implications of last April’s decision.

Some had informed him they were considering withdrawing permission allowing hillwalkers on their lands if the ruling stands, he said.

Others could follow - and that could result in the closure of the Wicklow Way, which runs from South County Dublin through the Wicklow mountains and ends in Co Carlow.

Mr Mellon, who works with landowners in Co Wicklow to facilitate hillwalking, was giving evidence before Mr Justice Michael White on the third day of the NPWS appeal against the Circuit Court decision in favour of hillwalker Teresa Wall.

In her action, Ms Wall said she fell after her foot snagged in a hole in one of the old railway sleepers that makes up a boardwalk on part of the trail.

The incident occurred close to the JB Malone memorial on the Sally Gap to Djouce trail near Roundwood on August 6th, 2013 while she and her husband were coming down the mountain.

Judge Jacqueline Linnane last April awarded €40,000 to Ms Wall against the NPWS at Dublin Circuit Court after finding reasonable care had not been taken to maintain the boardwalk in a safe condition.

This failure was responsible for Ms Wall’s injuries, the judge held. She said it was clear from the evidence the boardwalk had been made up of second-hand wooden railway sleepers that were badly rotted, with protruding staples loosely holding down chicken wire.

Mr Mellon told the High Court on Friday a scheme is in place where a small payment is made to any landowner who allows hillwalkers on their lands that form part of a trail.

Once a trail gets approval from the national accrediting body, the National Trails Organisation, insurance on the private landowner’s property is covered by Irish Public Bodies.

Mr Mellon said getting landowners to give hillwalkers permission to go on to their property had previously been “a tough sell”, but after the Circuit Court decision it had become an “impossible sell”.

Some of the Wicklow Way goes through lands owned by the NPWS and Coillte, plus 38 private landowners. Since the Circuit Court’s ruling, three private landowners had informed him they would withdraw their permission for walkers to go on their land.