Why a celebrity rape trial is a ‘monster that feeds itself’ 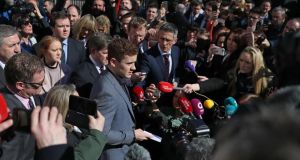 If the Belfast rape trial had taken place south of the Border it could not have received nearly as much publicity. In the UK the media are allowed to identify the accused in such cases, which means rape trials involving celebrities receive enormous amounts of coverage. In the Republic a person charged with rape can be identified only after being found guilty, and then only if doing so does not endanger the victim’s anonymity.

Until the Belfast trial the director of Dublin Rape Crisis Centre, Noeline Blackwell, was “conflicted” about which jurisdiction had the better law. “Given the intimate nature of sexual-violence trials, it is of value for all concerned to have them held other than in public and without identifying the parties to the proceedings,” she said.

When a case involves a celebrity, Blackwell believes, the media interest that accompanies being able to identify the defendant makes the trial more difficult for all concerned. Dublin Rape Crisis Centre has suggested the media adopt a code for covering rape trials. “Do all the prurient details have to be reported? Could there not be a decency standard?” she said.

The Republic’s ban on identifying anybody accused of rape or aggravated sexual assault before conviction is due in part to the stigma that can remain even if the defendant is found not guilty.

Oddly, the law does not prohibit naming people accused of sexual assault, including of children, as long as doing so does not risk identifying the victim. Dublin Rape Crisis Centre has asked the Law Reform Commission to consider this anomaly.

It is a basic legal principle here and in the UK that the law should operate in public; being found not guilty in public is meant to address any issue of public shame. People accused of murder are identified in both jurisdictions.

An experienced criminal lawyer in the Republic believes jurors tend to pay less attention than other people to what is in the media or being said online, precisely because they are in court

Social-media commentary, including threats to identify the woman who alleged she had been raped, was a huge factor in the Belfast trial; again, it was driven by the fame, and the naming, of the accused. The effect of such commentary is a hugely complicating matter for the legal system, according to the Belfast media lawyer Paul Tweed.

In this case “everyone involved was subjected to awful vilification and callous disregard”, Blackwell said. This adds to the pressure on both sides in rape trials, in an area of the law where victims can be reluctant to come forward and file complaints.

An experienced criminal lawyer in the Republic believes jurors tend to pay less attention than other people to what is in the media or being said online, precisely because they are in court, hearing the evidence and the directions from the judge. He calls a celebrity rape trial “a monster that feeds itself”.