Profiles: Who are the four acquitted in Belfast rape trial?

Three of the four Belfast trial defendants were rugby players 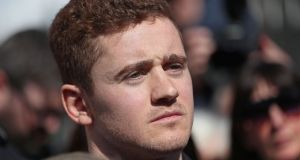 Paddy Jackson was born in Lisburn, Northern Ireland in January 1992 before moving to Birmingham with his family when his father got a job there.

There is a long history of rugby in his family. In 1999 he began playing mini-rugby for Veseyans RFC in Birmingham. The family including Jackson’s brother and sister, regularly returned to Northern Ireland and moved back permanently in 2000.

Jackson had already taken the entrance exams to the prestigious Methodist College in Belfast, known as Methody, and started attending on his return. The grammar school, which is ranked in the top 100 in the UK was founded by the Methodist church but accepts students from all religions.

By this stage Jackson was playing rugby a year above his age level and was signed to Ulster Rugby’s Academy, a feeder programme for talented young players which aims to channel them into the club’s senior squads.

It was here he met co-accused Stuart Olding. Jackson was already friends with Rory Harrison and Blane McIlroy from Methody.

Playing mostly as a fly-half, he was selected for the junior squads and in early 2011 was a surprise call-up for Ulster’s senior squad. That same year he was included in Ireland’s under 20 squad for the Junior World Championship. The following year he captained the squad during their Six Nation’s campaign.

In 2013 he made his senior Ireland debut against Scotland in the Six Nations Championship.

He has since appeared 25 time for the senior national side and continued to play after he was first arrested on suspicion of rape on July 30th, 2016.

As well as making a name for himself as a talented kicker who could take over for Johnny Sexton, Jackson also became know for joking around on social media, including by miming along to rap songs and playing practical jokes on his teammates. Online coverage with headlines such as “15 hilarious Paddy Jackson Instagram posts that prove he’s wasted in rugby” was not unusual.

In February 2017 he had what was perhaps his best game for Ireland when he kicked 18 points against Italy. Shortly afterwards Ulster Rugby extended his contract for two years.

Four months later he was told by the PSNI he would face charges in relation to the alleged rape.

The youngest of the men on trial, Olding was born in Belfast in March 1993 and attended Ben Madigan Preparatory school and then Belfast Royal Academy (BRA). Fellow Ireland player Ian Henderson was also a pupil and the two became friends.

Like Paddy Jackson, Olding comes from a strong rugby family and he played the game from the age of eight. He captained his school team in his final year there and was accepted to the Ulster Rugby Academy. It was here he met Paddy Jackson and Blane McIlroy.

Olding achieved two A levels at BRA and began studying sports science in the University of Ulster before giving it up in 2012 to focus on rugby.

He moved up through the academy and made his debut for the senior Ulster squad against Leinster in December 2011. The following year he played 14 games in a row. Since then he has appeared for his province 58 times, playing at centre, full-back and out-half.

He was called up for the Ireland under-20 squad in 2011 before making his senior squad debut against the USA in June 2013. He has earned five caps for his country at senior level and has scored one try.

In 2013 he was picked to go a tour of America with Ireland. Over the following two years he was plagued by injuries, suffering two tears to his Anterior Cruciate Ligament and requiring surgery. In 2016 he was picked to accompany Ireland on a tour of South Africa.

The incident that led to the accusation of rape took place directly after his return in June 2016. After being interviewed by police Olding continued to play for Ulster until April 2017 but not Ireland.

Blane McIlroy was born in Co Down in December 1991. He played rugby as a child with his local club Ballynahinch before attending Methodist College Belfast. There he met Paddy Jackson and the two became friends.

He was drafted into the Ulster Rugby Academy alongside Jackson and played age grade rugby for Ulster and Ireland, including representing the national under-20 side.

After school he played with Ballymena before making two appearances for his province as part of the Academy development. In 2012 he was admitted to the Ulster senior roster on a development contract.

After failing to secure a full senior contract in 2013 he took a scholarship to study business at Life University, a private college in Georgia, USA. The school has a large rugby programme and McIlroy played for the senior men’s team.

He was back in Belfast on holidays in June 2016 when the incident involving himself, Jackson and Olding took place. He has one semester still to complete at Life University but has been unable to return to America since his arrest because of the ongoing investigation and trial. He is currently employed at at plastic bag supplier in Lisburn.

Unlike his three co-accused, Rory Harrison has no senior rugby career of note and is the least well known of the men.

Born in Belfast in June 1992, the solicitor’s son attended Methodist College in Belfast where he met Paddy Jackson and Blane McIlroy. He played rugby with the school and played alongside Jackson on the Ireland under-18s schools squad.

After graduating he moved to Dublin to study history in UCD on a scholarship but continued playing rugby with the Ulster under-20s squad. He also played with UCD and with Terenure College RFC.

Harrison was working in Dublin in 2016 in the insurance industry and had just returned from a family holiday to Majorca when the incident occurred.

He moved to Sydney, Australia afterwards and worked in insurance there. He returned early this year for his trial.

All four men were acquitted of all charges by a jury at Belfast Crown Court on Wednesday.