White-collar whistleblowers to be granted immunity 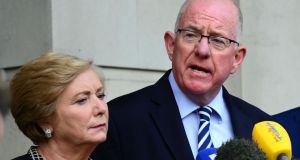 Tánaiste Frances Fitzgerald and Minister for Justice Charlie Flanagan are to bring a memo to Cabinet today with wide-ranging proposals in the area of white-collar crime. Photograph: Dara Mac Dónaill

Whistleblowers will be granted immunity from prosecution if they expose financial crimes, the Government is expected to decide.

Tánaiste Frances Fitzgerald and Minister for Justice Charlie Flanagan are to bring a memo to Cabinet today with wide-ranging proposals in the area of white-collar crime.

This is in response to a request made by Taoiseach Leo Varadkar, who appealed for a number of new policy measures in this area when he took office.

Mr Varadkar suggested a new Garda unit should be established and tasked with investigating organised crime and suspicious financial transactions. However, it is understood this will not be included in the announcement to be made later this week.

Government sources said it would be premature to proceed with such a initiative when the Garda was undergoing a reform process and its shape may change within the next 18 months.

The Cabinet, will, however, propose immunity from prosecution for whistleblowers who commit to giving their testimony “where this assists in the more effective suppression and prosecution of criminal activities”.

Such immunity could be restricted to the first person to come forward, it is understood.

There will also be efforts to allow for computer-generated business records to be admissible in court and also to simplify the rules on admissibility of the paper trails often central to white-collar crime trials.

Government figures said such reforms were under way already at the Department of Justice but they have taken on a new sense of urgency in recent months.

The announcement will not address the future of the Office of the Director of Corporate Enforcement (ODCE) as a review into the capacity of the office is still under way.

A report into the ODCE investigation into former Anglo Irish Bank chairman Seán Fitzpatrick has been completed and is with the Tánaiste. The High Court case against Mr Fitzpatrick collapsed earlier this year after serious failings in the ODCE’s investigation.

Meanwhile, Mr Flanagan is also to brief Ministers at today’s Cabinet meeting on a report carried out by Mr Justice John Murray into the accessing of journalists’ phone records.

Mr Murray was appointed in January 2016 after it emerged the Garda Síochána Ombudsman Commission (Gsoc) had accessed the phone records of two journalists. The commission was investigating the alleged leaking of information by gardaí in relation to the death in 2007 of the model Katy French.

Mr Justice Murray has compiled a 190-page report on legislation in other countries and best international practice for access to private communications information. His findings are believed to be very technical.

The review does not examine who commissioned the accessing of journalists’ telephone records or why such activity took place.

Instead it examines the wider issue of the retention of citizens’ data and makes a series of recommendations in this area.

A Government source said the Cabinet would also discuss the heads of a Retention of Data Bill, which would “offer significant protection” to citizens.

The report and the Bill will be published on Tuesday by the Minister for Justice after Cabinet discusses the issue.