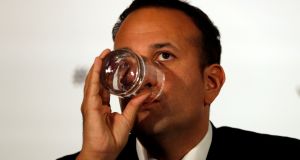 Leo Varadkar is likely to raise some taxes to pay for a cut in the universal social charge. Photograph: Action Images via Reuters/Paul Childs

Fianna Fáil is insisting Taoiseach Leo Varadkar honours a budget promise on mortgage interest relief that could cost €100 million, raising the prospect that he may be forced to raise significant funds elsewhere to cut income taxes.

Talks between Fianna Fáil and Mr Donohoe began last week and are scheduled to continue this week.

The confidence and supply deal between Fianna Fáil and Fine Gael, which underpins the minority government arrangement, commits both to retaining “mortgage interest relief beyond the current end date of December 2017 on a tapered basis”.

Michael Noonan last year announced it would be extended from 2017 to 2020 but the details were left to this year’s budgetary talks.

Sources said Fianna Fáil’s preference was to maintain the benefits for all those who purchased a home between 2004 and 2012, although it accepts the rate of relief has to be reduced.

While the exact mechanism by which this will be done has yet to be determined, sources said it will cost €60 million-€100 million.

Given that the Government will have only about €350 million of new money to spend on budget day, Mr Varadkar and Mr Donohoe are likely to raise some taxes to pay for a cut in the universal social charge, also part of the confidence and supply deal, and raising the threshold at which people pay the higher rate of income tax.

Mr Varadkar has placed a heavy emphasis on the latter. Despite the fact that any tax rises are outside the remit of the confidence and supply deal, Fianna Fáil’s co-operation is still required to pass the budget.

Party sources said it cannot be surprised by tax rises without preparing the ground with its own parliamentary party ahead of budget day on October 10th.

Mr Varadkar has already raised the prospect of increased duties on tobacco on alcohol but this is unlikely to be enough to meet all his promises. Sources have speculated that a minor increase in the 9 per cent VAT for the hospitality sector could come on the table.

Final calculations on the amount of money available to the Government are likely to be made this week, before being notified to the European Commission for verification by commission officials.

While official sources said that some extra resources are expected, this is not likely to be on the same scale as last year, when Mr Noonan found an extra €300 million for the budget.

This means that reductions in both income tax and the USC, as well as the mortgage interest relief, would have to be paid for by significant revenue raising elsewhere in the budget.

A 1 per cent increase, for example, in the VAT rate on the hospitality would raise €109 million. It has also been previously reported that Mr Donohoe was also mulling an increase in betting tax that would raise €50 million.