Judge criticises medical profession for commenting on his ruling 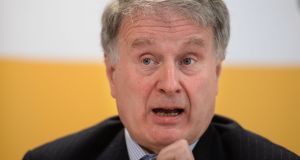 Mr Justice Kevin Cross gave lengthy consideration to the principals that should apply when deciding whether the inaccurate reading of slides in a screening programme constituted negligence. Photograph: Dara Mac Dónaill

Yesterday morning in the High Court, Mr Justice Kevin Cross strongly criticised members of the medical profession who have been commenting on his judgment in the case of Ruth Morrissey, who is terminally ill with cervical cancer.

In his ruling last week, the judge awarded Ms Morrissey and her husband, Paul, damages of €2.1 million. He also gave lengthy consideration to the principles that should apply when deciding whether the inaccurate reading of slides in a screening programme constituted negligence.

The response from the medical profession and the health system to this has included the expression of fears that screening programmes could, as a result, “grind to a halt”.

Sounding at times emotional, Mr Justice Cross said some of the commentary had been ill informed and “hysterical”. He said people should “really read what I have said”.

Jeremy Maher SC, counsel for the Morrisseys, said remarks in the media “appeared to misinterpret your decision in a fairly gross way”.

“In my decision,” the judge said, “I decided absolutely nothing new.”

So what does the judge say?

Given that this judgment was made in 1999 and has applied in our neighbouring jurisdiction ever since, and our neighbours are said to have one of the best screening programmes in the world, he gave the impression he was baffled by the fears being expressed by medical professionals.

In medical negligence cases, Irish courts look to a 1989 ruling called the Dunne case, which says the true test for establishing negligence “in diagnosis or treatment” by a medical practitioner, is whether he or she is guilty of such failure as no colleague of equal skill would be similarly guilty “if acting with ordinary care”.

The Penney case set out the standard of care that should apply in the examination of screening slides. (Screening is not at all the same as making a diagnosis.) In screening, the law has to deal with the finding of certain facts, such as what is to be seen on a slide, whether a screener exercising reasonable care could fail to see what was on the slide, and whether such a screener could treat the slide as negative (ie not containing warning signs for cancer).

In the Penney case, it was decided that if the screener had any doubt, he or she should not classify a slide as negative. The test should be “absolute confidence”.

So either screeners get it right or they’re negligent?

The Morrissey ruling says the exact opposite. Ms Morrissey’s smears were inaccurately read twice by two different labs. In the 2009 instance, the judge found it involved negligence. But in the 2012 case he found that although the reading was inaccurate, it wasn’t negligent – because of the similarity between the abnormal and normal cells that were beside each other on the slide. (He then went on to find negligence against the laboratory involved, for reasons to do with the quality of the slide.)

Why are the doctors upset?

Irish experts are saying that the screening process involves too much uncertainty for the use of the phrase “absolute confidence”. They say absolute confidence sets too high a bar, and could lead to healthy people not being told their slides are negative, because the screeners will be too cognisant of the uncertainty that is an inherent part of medical practice.

What about the laboratories?

That’s where it gets interesting. The evident exasperation of Mr Justice Cross was in part due to the fact that no one during the 37 days of the Morrissey hearing took issue with the Penney case. As he said, while welcoming the fact that his judgment was now going to be appealed, the “task facing the defendants in the Supreme Court will be very difficult, virtually impossible”, because what the defendants had said in their submissions to him, was no different to what he had put in his judgment in relation to “absolute confidence”.

However, Michael Cush SC, for Quest Diagnostics, did not agree. It was true that his side endorsed the Penney decision during the hearing. The problem, he said, was with how Mr Justice Cross, having adopted the Penney judgment, went on to incorporate it in the rest of his finding. He did not elaborate.

Unless the defendants can show that the judge’s ruling, in adopting what has been the law in England for the past two decades, created obligations here that are not binding on the other side of the Irish Sea, then it will be hard not to agree with Mr Justice Cross that some of the recent commentary has been overcooked.