Most consumers read privacy policies before signing up to app 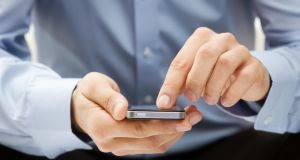 Mobile Data: The survey of 6,500 people in Europe, China, Africa and the US revealed 75 per cent of respondents always or sometimes read privacy policies and terms of conditions before signing up to a mobile app or service. Photograph: Getty Images/iStockphoto

More than half of consumers , 53 per cent, say it is “extremely important” that they know an app or service is using their personal data, a new survey has found.

The survey of 6,500 people in Europe, China, Africa and the United States revealed 75 per cent of respondents always or sometimes read privacy policies and terms of conditions before signing up to a mobile app or service.

A total of 86 per cent of them say they will go on to take some kind of action if their trust is challenged.

Almost half will stop using a service (a year-on-year increase from 38 per cent to 44 per cent) and nearly one in three (30 per cent) will warn friends and family.

Consumers in Belgium, China, France, Germany, Poland, Romania, South, Africa, Spain, UK and the US were surveyed in the second quarter of this year.

The Mobile Ecosystem Forum is a global trade body with a focus on issues affecting the broadening mobile ecosystem.

The organisation said that as businesses prepared for the new General Data Protection Regulation next year, consumers’ attitudes and behaviours around data-driven services appeared to be changing as well.

Eve Maler, vice president innovation and emerging technology with Forge Rock, said the trend in the survey was clear and was becoming urgent.

“Building trusted digital relationships in a mobile context is not just a matter of doing the minimum to satisfy regulators. It must involve satisfying consumers’ needs for personal data protection, giving them transparency into what you know about them, and providing options for consent, choice and control,” she said.

“If you can strike – and keep – a respectful bargain with savvy consumers [using a comprehensive identity, security, and privacy approach], they will in turn give you more visibility into their information.”

1 In this strangest of recessions, what happens next for Ireland?
2 Michael O’Leary is the boss you want to lead an airline out of crisis
3 Bank of Ireland sees about 2,000 staff apply for voluntary redundancy
4 Best Covid-19 ‘influencers’ will avoid hectoring
5 Should I switch bank now with Ulster Bank at risk of closing?
Real news has value SUBSCRIBE