The State's drug laboratory, Forensic Science Ireland, is located on the grounds of Garda HQ in the Phoenix Park. The lab is responsible for testing drug purity and quantity for the gardaí, and for detecting new types of drugs. Video: Conor Gallagher 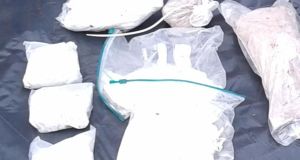 Heroin and cocaine seized under Operation Thor in Tipperary in March 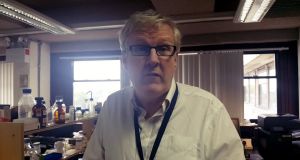 Forensic scientist John Power: “Now Ireland has one the highest rates of cocaine use among young people in Europe. We’re on the up. The boom is back.”

John Power, a senior scientist at the State’s laboratory, has an idea for measuring the country’s economic performance: look at how much cocaine we’re using.

“I actually think you could do a measure of cocaine popularity as an index for the national economy,” he says.

“When the economy collapsed in 2009 we reverted to traditional drugs, alcohol and cannabis, which was grown locally. No one had money any more for cocaine.

“Now Ireland has one the highest rates of cocaine use among young people in Europe. We’re on the up. The boom is back.”

Increased cocaine use is just one of many challenges faced by the State laboratory, known as Forensic Science Ireland, which is responsible for testing and measuring drug seizures by gardaí.

Power relishes the challenges. As we move through the cramped corridors of the facility, located in a grim 1980s office block at the back of Garda Headquarters, he points excitedly to various expensive-looking machines operated by men and women in white coats.

It resembles a school science lab except for the unmistakable smell of cannabis.

Power’s enthusiasm is infectious. He’s particularly eager to show off a stack of cocaine blocks, 15 in total, worth about €1.2 million, that have just arrived in the lab. The Drug Team Leader, Dr Hugh Coyle, is taking samples from the perfectly white, perfectly square packages before testing them for purity.

“Are there any free samples?” I ask. Power laughs. Coyle does not.

Despite the pure white colour of the packages, Power says they are likely riddled with impurities.

“Anyone who is taking cocaine is a poly-drug user and they don’t know it. It’s got Levamisole [used for deworming cattle], it’s got Benzocaine [a local anaesthetic], it’s got phenacetin [a painkiller] – it’s never pure. “

The same goes for heroin, or diamorphine to use its official name.

“Where does the name ‘heroin’ come from?” Power asks. “It was used in war. People who had their arms blown off fought on for another 15 minutes; they became heroes, therefore heroin.”

The heroin taken by Irish users bears little resemblance to the original substance, aside from the fact they both come from the opium poppy.

“Today they extract the substance using a solvent, typically a low-grade solvent like gasoline,” Power says. “So you end up with a very, very impure mixture.

“In Ireland you usually get Mexican heroin, which is brown heroin and contains a lot of substances. Even before it comes into Ireland it’s not pure.”

When it does come into Ireland it’s usually diluted again to bulk it out. The very end result is the 0.1 gram bags that are sold to addicts in Dublin and that produce two standard hits.

In recent years the State lab has been on the lookout for heroin seizures containing fentanyl, an extremely potent opioid that has caused hundreds of deaths in American and Europe.

Ireland has avoided the worst effects of the drug; so far the lab has dealt with just three fentanyl seizures, but Power warns these trends tend to ignore borders.

“What happens in one country will spread to another over time. There’s a big danger here because it looks like typical heroin. And we’ve also seen it in white powder form, so people could think its cocaine.”

Heroin, cocaine and cannabis still make up the majority of the work of the lab, but in recent years its scientists have also had to contend with the rise of so-called new psychoactive substances, often known as head-shop drugs or legal highs.

Last year the lab detected 27 new types of synthetic drugs in Ireland, most of which were designed to be cheaper versions of cocaine and cannabis.

Power says the problem started in the 1990s when European authorities began to crack down on the production of the basic ingredients for traditional synthetic drugs such as amphetamines, leading to a scarcity.

“What happens when you’ve got a scarcity? An alternative is sought. If you can’t get a Volvo, you’ll buy a Renault. ”

Amateur chemists began manufacturing their own drugs. The most common method was to take existing medicinal drugs, such as anti-cancer treatments, and make small changes at the molecular level to increase their psychoactive properties.

This resulted in drugs with names such as Snow Blow, Meow Meow and N-Bomb, which filled the shelves of the dozens of head shops that popped up almost overnight around the country in the late 2000s. By 2010 about one shop was opening a week and some operated throughout the night.

“All these variations were legal but they were mimicking an illegal drug,” Power says.

Growing crime rates in urban areas and increasing reports of overdoses forced the government into action in 2010. There was a problem, though. It would be pointless to ban individual drugs, as new versions with tiny molecular variations would soon replace them. The answer was to target the basic molecular structures, meaning any variations of these would also be illegal.

The head shops disappeared as quickly as they appeared. However, the drugs did not and the supply started to go to organised crime gangs.

Furthermore, the laws weren’t perfect. The lab continues to come across new drugs that are not covered by legislation.

“An awful lot of the people who are producing these drugs are actually very, very clever. They have people looking at the laws and saying, ‘Well, actually that’s not covered.’

“What we saw with the head shops was, as soon as a drug was banned they stopped supplying it to Ireland and started supplying other types. They were actually monitoring the Irish legislation.”

The crackdown all but eradicated the very public purchase and consumption of these new drugs but it inadvertently led to an entirely new set of challenges for gardaí and the lab: the rise of online drug-dealing.

“The biggest deliverer of drugs in Ireland today is An Post, ” says Power. “You go online, you select a gram of the latest thing and it comes packaged as cosmetics. It’s wrapped in three layers of cling film so the dogs can’t smell it.

“The big danger is people don’t actually know what they’re getting.”

The other danger is there is little incentive for the dealers to ensure what they are selling is not dangerous. Their customer is likely located several countries away and will have no recourse if something goes wrong.

Power points to the death of Cork teenager Alex Ryan (18) last year, after he took a synthetic drug called 251-NBOMe, known as N-Bomb, supplied to him at a house party. Five others at the party were hospitalised.

Online dealing is a largely hidden phenomenon. Unlike the traditional drug trade, everything takes place online and the product is delivered directly to the customer’s house. Arrests are rare and statistics are patchy.

“The only time the guards and the emergency services become aware of these cases is when something happens like it did in Cork,” Power says.

The laboratory is also facing other challenges including the rise of Breaking Bad-style home laboratories, which are being used to makes amphetamine and methamphetamine.

“Methamphetamine was never very popular in Ireland but it is popular among the new Irish in the immigrant community, particularly among eastern Europeans. They’re making it in their own communities,” Power says.

The lab’s scientists are increasingly getting called out to these kitchen labs.

“Typically when the guards see something bubbling away and they don’t want to go near it, we get called in. We’ve gone to scenes when they have kids in the house and they’re cooking in the kitchen. It’s very sad and dangerous. Nine times out of 10 it’s a fire risk.”

“Every country likes their individual drugs. For the Polish and Czechs, it’s methamphetamine.”