Woman beaten and abused by Belfast nuns settles action for £50,000 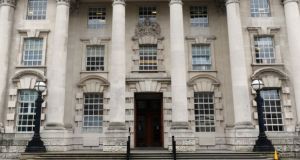 The settlement was announced at the High Court in Belfast.

A woman who claims she was repeatedly beaten by nuns and forced to bathe in barely diluted disinfectant at a children’s home in Belfast is to receive a £50,000 (€57,000) payout.

The settlement was announced at the High Court in a case which also involved allegations she was fed food unfit for human consumption.

The woman, who is not being identified, sued the Sisters of Nazareth over her treatment while in their care decades ago.

Her lawyers claimed she was subjected to assaults, neglect and humiliation at Nazareth House.

It was alleged that the woman endured repeated beatings with a leather strap, stick and bunch of keys. She claimed fingernails were pressed into her arms and wrists, and clumps of hair pulled out.

Papers in the case alleged she was forced to remain outdoors for lengthy periods in extremely cold weather while inadequately clothed. The woman further claimed that she was at times kept alone inside an unlit cupboard.

Allegations of humiliating her in front of other residents for soiling her bed and making her bathe in “barely diluted liquid disinfectant” were raised.

In court on Monday, the plaintiff’s barrister, Patrick Lyttle QC, confirmed the terms of a resolution reached. The case has been settled for £50,000 plus costs, Mr Justice Maguire was told. There is no admission of liability by the defendants.

Following the outcome the woman’s solicitor insisted the Historical Institutional Abuse (HIA) Inquiry’s recommendations for compensation for victims and survivors must be implemented.

Claire McKeegan of Phoenix Law said: “Given the ongoing failure of the Secretary of State to implement a Redress package for Survivors and Victims in NI, we have no option than to litigate these matters before the Courts.

“The derisory amounts of compensation that have been recommended by the HIA report do not in any way reflect the cruelty and degrading treatment that was inflicted on children during their time in care and the profound and permanent effect that has had.”