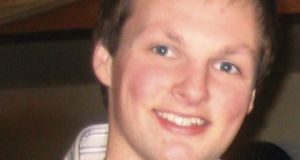 Shane O’Farrell was killed in August 2011, while cycling on the N2 near Carrickmacross, Co Monaghan.

The family of a young man, killed in controversial circumstances by a serial criminal who should have been in jail at the time, has criticised a Government decision to appoint a judge to examine the case rather than order an immediate public inquiry.*

Judge Gerard Haughton of the District Court was on Tuesday night appointed to conduct a scoping exercise to determine what further inquiries, if any, should be conducted into the killing of 23-year-old Shane O’Farrell.

He was killed in August 2011, while cycling on the N2 near Carrickmacross, Co Monaghan.

The dead man’s family said the scoping exercise fell far short of a resolution passed in the Dáil last June which called for a public inquiry into the case.

The O’Farrells have always campaigned for a public inquiry and as that had now not been granted, they said they were considering their “next steps”

“There was no consultation with the family, nor has the family had the opportunity to consider or comment on the terms of reference,” the O’Farrell’s said in a statement issued by the deceased man’s sister Gemma O’Farrell.

Members of the family had met Minister for Justice Charlie Flanagan at short notice on Tuesday and were informed of the decision to appoint Judge Haughton to review the hit and run killing and related matters.

The driver of the car, Lithuanian man Zigimantas Gridziuska, should have been in custody at the time due to his his continued breach of bail, the O’Farrell family previously said. He had 42 previous convictions. Arising from Mr O’Farrell’s killing, on a break from college exams and while training for triathlon, Gridziuska was convicted of leaving the crash scene on the day and given a suspended sentence.

Mr Flanagan said the scoping exercise into the case was now possible because all inquiries by the Garda Siochana Ombudsman Commission (Gsoc) were complete.

“I have assured Mrs O’Farrell that Judge Haughton will meet with her and her family in early course and that he is entirely free to recommend any course of action to me which he considers appropriate,” he said in reference to Lucia O’Farrell who has determinedly led the family campaign for a public inquiry.

Changes to the administering of bail and bench warrants introduced since Mr O’Farrell’s killing will also be examined to test if they have addressed gaps in the justice system already exposed by the case.

Judge Haughton has been asked to draw up his report within eight weeks. He will decide if unanswered questions remain, if further inquiry or investigation is required and what form they might take.

Some seven months before Mr O’Farrell was killed Gridziuska was convicted of theft. The judge in Monaghan adjourned the case for a year to consider whether a custodial sentence was appropriate.

He said if the Lithuanian was convicted of any further frauds or thefts he would be jailed immediately. But in May 2011, when convicted of another theft in Ardee he was not brought back for the court in Monaghan and so was not jailed.

Though he was before different courts a further four times on other matters in the weeks that followed, and breached his bail conditions repeatedly, he remained at liberty and killed Mr O’Farrell in August, 2011.

Gridziuska was also stopped in his car by gardai about an hour before the fatal crash and though it was not roadworthy and had no NCT it was not impounded.

Gridziuska has convictions for fraud, theft, possession of heroin and traffic offences.

Mr O’Farrell’s parents, Lucia and James O’Farrell, and his four sisters have campaigned for an inquiry into the failures of gardaí and the criminal justice system.

* This artilce was amended on February 14th to clarify that the family were critical of the Government’s decision not to immediately direct that a public inquiry be held.