Inquiry into alleged surveillance of prison officers has been completed 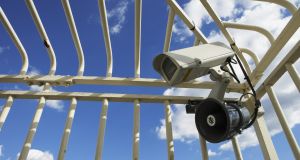 An investigation into whistleblower claims of covert surveillance in the country’s prisons has been completed. File photograph: Getty Images

An investigation into whistleblower claims of covert surveillance in the country’s prisons has been completed.

Minister for Justice Charlie Flanagan had asked Inspector of Prisons Patricia Gilheaney to carry out a preliminary inquiry into claims that prison officers’ cars were tracked and that conversations were monitored.

Ms Gilheaney has now completed her work and has provided a report to the Minister.

“I can confirm that the Inspector of Prisons has furnished me with a copy of the report of her investigation, carried out under section 31 of the Prisons Act, 2007, into allegations of improper surveillance and other wrongdoing in prisons,” Mr Flanagan said in response to a parliamentary question.

The Minister said he is now considering the report in consultation with the Attorney General with a view to publishing it. The report may also be laid before the Oireachtas.

Last year a serving prison officer made a number of claims concerning surveillance in a sworn affidavit as part of a legal action against the Irish Prison Service.

These include allegations that tracking devices had been placed on prison officers’ cars, and that conversations between solicitors had been monitored.

It is also claimed that a private detective agency was hired to carry out the surveillance without the necessary permits and permissions, as part of an operation to stop drugs and mobile phones from illegally entering prisons.

The affidavit is also reported to claim that a van containing drugs and telephones associated with a major criminal gang was allowed into a prison campus without the knowledge of the prison governor or staff.

Workers from a private detective agency were also given false identities to enter a prison to install covert surveillance cameras, it is claimed.