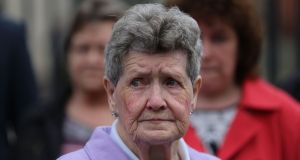 Beatrice “Bea” Worton’s son Kenneth was among those killed in a sectarian massacre of 10 protestant workmen in 1976 near the Co Armagh village of Kingsmill. Photograph: Niall Carson/PA Wire

Tributes have been paid to Northern Ireland victims’ campaigner Bea Worton who has died aged 91.

Ms Worton’s son, Kenneth, was one of 10 Protestant workmen killed by IRA gunmen in what became known as the Kingsmill massacre in 1976.

“I met Bea on number of occasions and each time she had a compelling and powerful determination to get justice for her son. She was someone who became a campaigner out of necessity.

“I am so sorry she has passed away without justice for her son who was so brutally murdered at the Kingsmill massacre. I want to pass on my deepest sympathy to her family at this difficult time.”

Speaking last year at the narrow country road near Newry, Co Armagh, where her 24-year-old son was lined up with work colleagues and shot dead, Ms Worton said those responsible should be identified.

“I want to see them all named. Just to see who we have been mixing with all these years,” Ms Worton said.

“We always lived with our neighbours, I went to a mixed school... Kenneth would have mixed with anybody, in fact his best pals were all Catholics.

The textile factory workers were ambushed as they travelled along the Whitecross to Bessbrook road on January 5th, 1976, one of the darkest years of the Troubles, allegedly in reprisal for earlier loyalist killings.