Two arrested in connection with murder of Keane Mulready-Woods 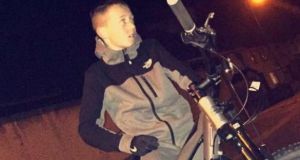 Keane Mulready-Woods (17). His remais were found in two portions in north Dublin in the days following his disappearance.

One of two men arrested by gardaí investigating the murder and dismemberment of Keane Mulready-Woods (17) in Drogheda, Co Louth, last month has vital information about how the crime was organised, gardaí believe.

After the remains of Mulready-Woods were found in two portions in north Dublin in the days following his disappearance, gardaí identified a house in Drogheda where they believe he was killed and dismembered.

A key part of the investigation has centred on that house, including ascertaining who was present around the time of the crime.

Detectives believe one of two men arrested could provide evidence that would result in serious criminal charges, including murder, being pressed against multiple suspects.

Gardaí said the two males arrested on Thursday morning were being held at Drogheda and Balbriggan Garda stations under section 50 of the Criminal Justice Act.

The two suspects can be detained for up to seven days without charge as the legislation they have been arrested under is used to deal with suspected gang crime. The arrest of the two suspects came exactly one week after the burial of the teenage victim.

Late the following night, Monday, January 13th, his limbs were found in a bag dumped on a pavement in Coolock, north Dublin. And in the early hours of Wednesday, January 15th, his hands, feet and head were found in a stolen car that was on fire in a laneway in Dublin’s north inner city.

The 17-year-old was aligned to one of two drug gangs based mainly in Drogheda who have been involved in a bitter feud for about two years. Mulready-Woods, who had convictions for threatening and intimidating people in Drogheda, was the third person to die in the feud.

The funeral of the deceased took place last week, although his torso has not yet been found. In his homily, Fr Phil Gaffney called for the feud to end and urged young people present to take lessons from the murder of Mulready-Woods.

He said the boy “had his troubles”, adding that he was “young and naive enough to fall in with the wrong people, not knowing or anticipating the dire consequences”.

“I hope that his death will be a warning to other young teenagers who are being groomed by the ruthless criminals; that the promise of money and gifts will inevitably end in tragedy,” he said.

“Keane’s association with them, sadly, led to the inhuman, unthinkable way in which his young life was to end.”