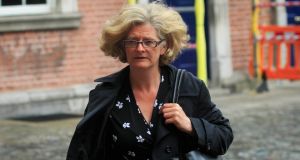 Counselling director Fiona Ward at the The Disclosures Tribunal in Dublin Castle, Dublin on Thursday.

A counselling professional has said she never formed the impression the Garda were attempting anything improper in relation to a file containing a false and serious allegation of child sex abuse against whistleblower Sgt Maurice McCabe.

The witness to the Charleton Tribunal also said it did not cross her mind that the error, which led to the serious and false charge, might have been connected to Sgt McCabe’s known role at the time as a whistleblower and the fact that Sgt McCabe was featuring prominently in the media.

The tribunal is investigating, amongst other matters, an alleged smear campaign against Sgt McCabe directed by senior Garda management and allegedly involving use of a 2006 complaint of sexual abuse made against him by the daughter of a Garda colleague.

This complaint, by a woman being referred to as Ms D, led to a decision by the Director of Prosecutions not to press charges on the grounds that, even if true, it was doubtful that it constituted sexual abuse.

However in 2013, as a result of an “administrative error” inside the Rian counselling agency, a report referring to Ms D’s complaint wrongly included a much more serious allegation, which had never been made against Sgt McCabe.

The director of counselling with Rian, Fiona Ward, told Patrick Marrinan SC, for the tribunal, of her efforts to retrieve the false report after it had been sent by her colleague, counsellor Laura Brophy, to the child and family agency, Tusla.

Asked if she had been suspicious that something was “amiss” with the error occurring at a time when Sgt McCabe was “in the public gaze”, Ms Ward said she had no concerns about Ms Brophy. Asked if the Garda’s response gave her the impression that they were “seizing an opportunity to open an old wound”, Ms Ward said the Garda seemed more concerned with establishing if this was a new complaint or not against Sgt McCabe.

Responding to Michael McDowell SC, for Sgt McCabe, she agreed that if she had been following the Child First procedures introduced months earlier, she might have sat down with Tusla staff and the mistake made by Ms Brophy might have immediately become apparent.

Mr McDowell said that because the guidelines were “completely ignored”, the erroneous report “took on a life of its own”.

She said pressure of work and other reasons had led to the procedures not being followed in her region and that this was also true in relation to other regions of the service.

She agreed that the Garda would quite properly have been interested in establishing if the mistake had come about because someone was “trying to ramp up pressure” on Sgt McCabe or how it had come about that the version of the abuse alleged had changed “in the middle of a high profile series of events” in relation to Sgt McCabe.

Ms Ward said the primary focus of her data protection concerns at the time were in relation to Ms D though she did also consider the position of Sgt McCabe.

Mr McDowell said the “primary victim of the catastrophic mistake” was his client, and asked if there had any discussions about his position and the idea of apologising to him.

She said her memory was that it was considered that this might have been a matter for Tusla as Rian had not been in contact with the sergeant.

Mr McDowell suggested that “someone owed Sgt McCabe the small courtesy of telling him that his reputation was being shredded in private through gross incompetence.” He said his client was not informed as to what had happened until he received a letter in late December 2015.

It was also only more recently, she said, that she had learned that files had been opened in relation to Sgt McCabe’s children.

The incorrect report, which had been sent to the social worker service in August 2013, was returned in July 2014 to Ms Ward. However, she had not been aware that the sending of the report would have prompted Tusla to produce its own notification report, which it forwarded to the Garda.

There was, Mr Marrinan said, “a catalogue of errors” which led to people “talking at cross purposes” as Ms Ward was seeking to retrieve the records of these incorrect allegations.