Three passengers arrested after €245,000 of cocaine seized at Dublin Airport

Gardaí say two men and a woman, in their 20s, had ingested about 280 pellets of drugs 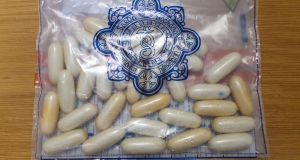 Gardaí have seized €245,000 of cocaine at Dublin Airport on Sunday. Three people, two men and one woman all aged in their 20s, were arrested in connection with the incident at about 7.50pm.

Customs officers alerted gardaí about three passengers who had arrived on a flight from mainland Europe that they had detained on suspicion of drug trafficking.

A Garda spokesman said the passengers had ingested about 280 pellets of suspected cocaine (pending analysis).

All three persons were arrested and taken to Ballymun Garda Station detained under Section 2 of the Drug Trafficking Act 1996.

One of the arrested men and the woman have since been charged in relation to the incident. They are due to appear before the Criminal Courts of Justice on Tuesday. The other man remains in Garda custody.