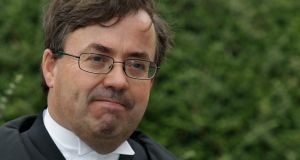 Mr Justice Gerard Hogan, who for many years was a professor in law at Trinity College as well as practising barrister, is regarded as a leading authority on the Irish Constitution. Photograph: Collins Courts

Mr Justice Gerard Hogan, a former Court of Appeal judge, on Wednesday took up the position of advocate general to the European Court of Justice.

He was nominated by the Government to the position last May and after an assessment by an expert panel required under the European treaties, his appointment was ratified this week.

The notice was published in the Official Journal of the European Union and took effect on Wednesday, a spokesman for the Department of Justice said.

There is no equivalent in the common law system (such as exists in Ireland) of the advocate general, but it is a key position in many European legal systems, and in the EU’s courts.

Following an examination of each side’s cases, which includes the right to question the parties, advocates general present a legal opinion on the cases assigned to them by the judges of the European Court of Justice. Their opinion is intended to assist the deliberation of the judges.

The intention behind the role is that independent advice can be given to the court. While the opinions are not binding on the court, they tend to be influential and, more often than not, are followed by the court.

Mr Justice Hogan, who for many years was a professor in law at Trinity College as well as practising barrister, is regarded as a leading authority on the Irish Constitution.

He established his reputation as a leading legal scholar and an authority on constitutional law at Trinity, while also arguing many constitutional cases in the higher courts. He and his TCD colleague Gerry Whyte wrote the second edition of the standard text on the Irish Constitution, the first edition of which was written by Prof John Kelly.

He was appointed to the High Court in 2010 and to the newly established Court of Appeal in October 2014.

During Christmas 2010, he held an emergency High Court hearing at his home to order that a very ill child be given a blood transfusion, despite the parents’ objections on religious grounds.

He was also one of three judges who heard the “right to die” case of multiple sclerosis patient Marie Fleming.

Mr Justice Hogan was educated at UCD, the University of Pennsylvania and the King’s Inns. He was awarded a PhD from Trinity College Dublin. Among his other specialities as an academic were administrative law, public law and EU law.