Thomas and Molly Martens walk out of jail pending retrial

Judge sets $200,000 bond as lawyers decline to comment on reports of plea bargain 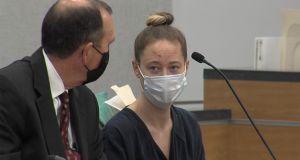 Molly Martens seen in court with a mark on her forehead

Shortly before 2pm in Courtroom Six of the Davidson County Court House, Thomas Martens was led into the room. Shortly afterwards he was followed by his daughter, Molly. They sat apart, flanked by their lawyers.

Thomas (71), a retired FBI agent who was convicted of the murder of Limerick man Jason Corbett in 2017, looked relaxed as he waited for the bail hearing to begin, speaking quietly to his lawyers David Freedman and Jones Byrd.

Molly (37) sat beside Doug Kingsbury, her defence attorney, and remained stony-faced for the almost hour-long hearing.

Both wore boiler suits – the father dressed in orange, Molly in navy-blue – and were handcuffed and in ankle shackles. Molly wore orange sandals, her dark hair arranged in a bun at the top of her head, a mark visible on her forehead.

As the court waited for the judge to enter, the sound of a small child laughing could be heard. It was one of Thomas Marten’s grandchildren, who had been born while he had been serving time in prison for the murder of Jason Corbett.

Ever since the North Carolina supreme court upheld a ruling by the appeals court last month calling for a retrial in the Jason Corbett murder case, the two defendants have been preparing for a bail hearing.

Opening proceedings, Alan Martin for the state recapped some of the details of the 2017 murder trial. He recounted in graphic detail the autopsy evidence that was presented during the trial, proving that Mr Corbett had died from at least 10 blows to the head, and that Thomas Martens had attacked his son-in-law with an aluminium baseball bat while Molly had repeatedly struck her husband with a concrete paving block. He reminded those present that there had been no discernible injuries to the defendants or to their clothing when emergency services responded to the 911 call that night.

He also stressed that it was never contended that the two defendants did not kill Mr Corbett. Instead they argued that they had acted in self-defence.

He requested that the judge set a bond of $1 million, noting that the Martens were of substantial means. But lawyers for the defendants refuted these arguments, positing that the figure of $200,000 bail was more appropriate.

Counsel for Thomas Martens produced a letter from the North Carolina Department of Public Safety praising the 71-year-old’s “model” behaviour while a prisoner. He had a “track record for coming to court, a track record for being a model inmate”, said David Freedman, arguing that he did not pose a flight risk.

In a little under an hour, the hearing wrapped up as the judge ruled that a $200,000 bond was necessary. The Martenses were also obliged to surrender their passports and have been banned from having any contact, directly or indirectly, with Jason Corbett’s family, including his two children, Jack and Sarah, who are now under the guardianship of their aunt Tracey Corbett Lynch in Limerick.

Less than 90 minutes later, Molly Martens walked out of Davidson County Jail. Her father was released shortly after. Lawyers declined to comment on reports of a plea bargain negotiation under way by the Davidson County District Attorney and lawyers for the Martenses – such an arrangement could negate the need for a retrial, a prospect that the Corbett family oppose. But for the moment, Molly Martens and her father Tom are free, pending a retrial of their case.