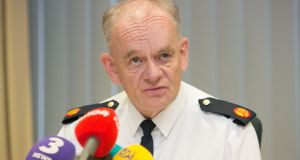 Assistant Commissioner John O’Driscoll: “More than 30 lives had been saved in the past 18 months since the feud erupted.” Photograph: Gareth Chaney/Collins

A feared significant rise in gun killings when the Kinahan-Hutch feud began has not materialised, the Garda officer leading the investigation of gangland crime has said.

Assistant Commissioner John O’Driscoll said more than 30 lives had been saved in the past 18 months since the feud erupted in Ireland because gangland murders had been foiled.

In many cases the criminals intercepted had “gun in hand” and were wearing items associated with an imminent gun attacks such as gloves and balaclavas.

“They were cases where there was definite intent to kill that was not achieved because of the actions of An Garda Síochána, ” Mr O’Driscoll said.

And he believed that while crime gangs were prolific, they did not have the capacity to continually shake up some of their gunmen being arrested and jailed on remand pending trial or under sentence.

“There are a limited number of people, one would expect, who are prepared to murder in this city at any time,” he said of Dublin. “What is their capacity to do that without these people who are arrested as suspects?

Mr is the officer in charge of Special Crime Operations, made up of the Garda’s specialist crime investigation units.

Those units have different specialities in investigating a range of serious crime such as drugs, gun crime, gangs, organised and high-level fraud.

Mr O’Driscoll said that, since March 2015, the Garda Drugs and Organised Crime Bureau had seized some 60 firearms along with 2,800 rounds of ammunition, €3.4 million in cash and drugs valued at €100 million.

Speaking to the media in Dublin on Thursday, Mr O’Driscoll said some 57 gardaí and six sergeants had this week been transferred into Special Crime Operations. That brings to 147 the number of additional gardaí and sergeants assigned to the specialist units this year.

He said those extra resources, and the manpower investment already made in the specialist Garda units, was now paying dividends.

He noted when the Kinahan-Hutch feud accelerated sharply with an attack in a Dublin hotel in 2016 there were fears that the rate of gun murders would significantly increase. But this has not happened.

While he did not refer to specific numbers of gun killings, some 12 people have been murdered in the feud. But the number of gun killings in Ireland generally has remained very low.

Mr O’Driscoll believed the reason for this was the success enjoyed by the Garda in preventing many gun murders.

And because attacks were being foiled so regularly, there had been an increase in the number of people currently charged with conspiracy to murder.

“That is a charge that has not been as common in our history of dealing with crime,” he said. “It means you’ve got there before the act has happened; preventing it taking place. So people are charged with organising murders and not carrying them out.”

He added every time “one or two criminals” were charged it damaged major crime gangs because their members were taken off the streets.

Det Supt Michael Gubbins, the head of the Garda’s Cyber Crime Bureau, is one of the senior officers whose investigation team will receive some of the additional personnel assigned to the specialist units.

He said among the top three cyber crimes that people in the State are falling victim to is denial-of-service attacks, where websites, computers or IT systems are deliberately overburdened, causing them to cease functioning. People are also having to deal with ransomware, where computers are encrypted when users open emails or attachments sent by those responsible for computer attacks. In order to gain access to their files, a ransom is demanded via online payment. Phishing is the third common cyber crime, where fake emails purporting to be from a legitimate entity such as a bank are sent to users with the sole purpose of gaining access to their bank account details.