Irish woman killed her family before taking own life, say US police 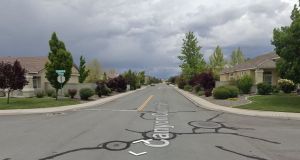 Joan Huber (53), originally from Coolcuslaugh near Killarney, Co Kerry, was found dead following an apparent murder-suicide in the Canyon Country area of the city of Reno, Nevada, US. File photograph: Google Street View

An Irish mother shot dead her husband and two teenage sons before taking her own life, US police have said.

Joan Huber (53), originally from Coolcuslaugh near Killarney, Co Kerry, was found dead following the apparent murder-suicide on Wednesday in the US city of Reno, Nevada.

Police discovered the bodies after they were alerted by neighbours who said they had not seen the family in days.

On Friday, Reno detectives issued a statement saying their investigation had established that Ms Huber, “within the preceding days of March 4th, shot her husband, 50-year-old Adam Huber, and their two teenage children, before taking her own life”.

“Reno Police Robbery/Homicide Detectives are still actively investigating this case and there is no known motive at this time.”

Ms Huber (nee Kelly) was the eldest of five children of the late John Kelly, a former president of the East Kerry GAA and one-time general election candidate who died in February 2018.

Mrs Huber’s mother Sheila (nee Doolan) and a number of her siblings live in Killarney.

Kerry TD Danny Healy-Rae, speaking to Radio Kerry after reports of the deaths emerged, said: “I know them to be a good, hardworking honest family and pillars in the community and the type of people you would like to be friends with.

“It’s so tough and so hard. It’s very hard to understand why these things happen.”

The body of Ms Huber was found alongside her husband and teenage sons Adam J Huber (17) and Michael P Huber (16).

It was reported Adam P Huber had worked as a master technician at the Reno Buick GMC car dealership since 2006.

Reno director of marketing Doreen Hicks said he “has always been a valued member of our team. We mourn the loss of him and his family.”