Woman charged with murder of Irish dancer in London

Adrian Murphy from Kilkenny was found dead at Battersea flat 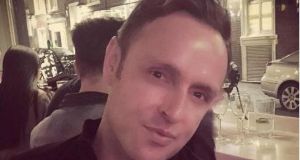 A woman has been charged with the murder of a champion Irish dancer last summer.

Adrian Murphy (43), originally from Kilkenny city, was found dead at a flat in Battersea on June 4th last year.

Metropolitan police have confirmed 18-year-old Diana Cristea of Barnet in London was arrested on Tuesday and is due before Wimbledon Magistrates Court.

Ms Cristea is also charged with one count of poisoning against a 40-year-old man in a separate incident in Walthamstow, two counts of theft and two counts of fraud by false representation in relation to both victims.

A 25-year-old man has already been charged in relation to both incidents.

Joel Osei of no fixed abode was remanded in custody in December and is due before the Old Bailey on February 17th.

Police said property was stolen from the premises where Mr Murphy was found.

Their investigations were centred around whether his death was linked to a date he had with a man through the dating app Grindr.

Their inquiries have linked the incident to an earlier allegation of the rape of a 40-year-old man at an address in Walthamstow, north-east London, on May 30th.

Mr Murphy produced and choreographed Celtic Dance Force, Feet of Fire and FireDance The Show. He also made television appearances in the UK, Australia and US.