Supreme Court to get its own building for the first time 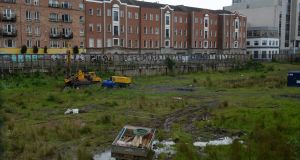 The site on Dublin’s Hammond Lane where it is proposed the Supreme Court be rehoused. Photograph: Cyril Byrne

The Supreme Court is to get its own building for the first time following years of lobbying from senior judges.

Legal professionals were recently invited to preview plans for a new Supreme Court, which will be part of a proposed €40 million legal complex containing family law facilities on Hammond Lane in Smithfield.

The development will be on a 0.45 hectare site close to the Luas Red line. It is expected to open in 2020.

As well as a dedicated Supreme Court building, the complex will house 21 courtrooms, 30 judge’s chambers and 31 consultation rooms for solicitors and their clients.

The Supreme Court has been located within the neighbouring Four Courts since shortly after the foundation of the State.

The move would fulfil a long-term aim of Chief Justice Susan Denham, who has been campaigning for improved facilities for several years.

Ms Justice Denham has previously complained to government about the poor working conditions in the Four Courts, which she said was responsible for several judges becoming ill.

The chief justice went as far as bringing a thermometer into the court and taking temperature readings to highlight the lack of heating.

It is understood members of the Supreme Court are also unhappy they have been left with antiquated resources while their colleagues on the criminal bench enjoy the modern facilities of the new Criminal Courts of Justice on Parkgate Street such as flatscreen television screens and video-conference technology.

The existing Supreme Court rooms will continue to be used for ceremonial purposes such as retirements and the swearing-in of new barristers and judges.

Although planning for the Family Court complex has been ongoing for nearly two years, it is understood the inclusion of the Supreme Court was only decided about six months ago.

Since then architects have been working with the Courts Service and the Office of Public Works to draft the plans, which will be submitted for planning approval in the summer.

A Court Service spokesman said the current Supreme Court facilities are not suited to a court where up to seven judges have to hear a single case.

“When the Four Courts were built, Ireland’s de facto Supreme Court was the House of Lords in London. Our new modern, efficient Supreme Court needs to move from an archaic physical plan from colonial times to a facility which will accommodate the office, researchers, clerks, judges and courtroom of the Supreme Court, where each has ease of access to each other.”

He said the nation’s highest court deserves its own distinct building.

“There is currently no separation, distinction or identity given to Supreme Court accommodation that is befitting of the pinnacle of the justice system in Ireland and in any way comparable to equivalent courts in other countries.”

The complex will be built and run through a public-private partnership, similar to the Criminal Courts of Justice. A private company will be contracted to construct and manage the building.

It is understood the Department of Justice has not signed off on financing either of the new projects but sources in the Court Service say they are confident the money will be found due to the urgent need for improved family court facilities.