European public prosecutor’s office set up, but Ireland opts out 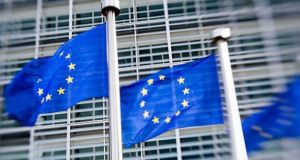 Seventeen years after the proposal was first mooted EU justice ministers on Thursday finally agreed to the establishment of a Luxembourg-based European Public Prosecutor’s Office (EPPO) to pursue fraudsters dipping in to EU funds.

Up to €500 million is going astray each year in this way, according to the Commission.

A Commission spokesman described the move as a “game changer in tackling financial crime”.

Some 20 EU member states signed up to the EPPO under the “enhanced co-operation” arrangements which allow groups of member states to move ahead of others with common projects.

However, the Netherlands, Sweden, Malta, Hungary, Poland, the UK and Denmark are not participating, nor is Ireland which has a treaty right to opt in – or out – of elements of justice and home affairs co-operation.

The Irish Government has viewed with suspicion any merger of EU legal and our national systems which operate under different, and it is argued, incompatible legal principles.

Irish sources said there were concerns about compatibility with Irish constitutional protections on due process and the admissibility of evidence, but that Ireland would co-operate with the office once it is in place.

But the opt-outs were apparently called into question by justice commissioner Vìra Jourová in an interview in which she appeared to want to link affiliation to the EPPO to receipt of Cohesion funding totalling €63.4 billion between 2014 and 2020, in the next budget cycle.

She said she would ask budget commissioner Günther Oettinger, who is preparing a “reflection paper” due soon on the future use of EU funding, to consider the issue in the interests of reassuring taxpayers.

At the ministers’ meeting in Luxembourg, the commissioner appeared to row back somewhat, claiming she had been “misquoted” on “conditionality” and at the Commission briefing in Brussels a spokesman said there was an ongoing discussion between member states on the issue.

The commissioner may indeed have been misquoted, but the radical idea of introducing a linkage between financial benefits and a state’s commitment to specific anti-fraud measures is clearly under active discussion.

And ten days ago it was also mooted in a German paper in respect of cohesion funding and adherence to the rule of law – a clear dig at wayward Poland and Hungary.

This is an idea whose time is coming – Ireand may have to reconsider its opt-out.