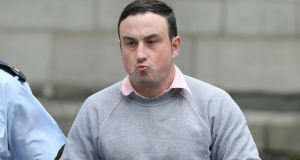 Aaron Brady was sentenced to a minimum of 40 years’ imprisonment on Wednesday. Photograph: Collins Courts

The family of Aaron Brady, who shot dead Det Garda Adrian Donohoe 7½ years ago and was sentenced to a minimum of 40 years’ imprisonment on Wednesday, has launched a campaign questioning the grounds for his conviction.

The Justice4AaronBrady campaign has launched a website and social media accounts while videos have also been produced featuring Brady’s father, Tony Brady, the former chairman of Crossmaglen Rangers GAA club.

“We will be rolling out Aaron’s story and what we see as the truth,” Mr Brady says on a video published to mark the launch of the campaign.

The Brady family campaign, which is likely to draw strong criticism, was launched online on Monday and comes as Brady was expected to lodge an appeal to his conviction after his sentencing hearing at the Central Criminal Court on Wednesday for the capital murder of Det Garda Donohoe.

“My son Aaron Brady is no saint, but the following evidence strongly suggests that he was wrongly convicted for a murder he did not commit,” Tony Brady writes on the campaign website before listing what he says are his areas of concern.

He then adds: “My strong condolences go to the family, friends and colleagues of Adrian Donohoe, who will be seeking justice and closure on his murder. But what follows suggests that Aaron Brady is not your man.”

Tony Brady and his wife Caroline were present in court on Wednesday. After the hearing, along with family representative Kealan Harrington, they approached the media gathered outside the court.

Mr Harrington spoke on behalf of the Bradys and said, “Aaron Brady is not without his faults, none of us are”. He claimed the family was aware of evidence that “sheds reasonable and strong doubt on key points of evidence that have contributed to Aaron’s conviction for the murder of Adrian Donohoe”.

When pressed repeatedly by the media to detail what he was referring to, he declined to respond to questions and neither of Aaron Brady’s parents spoke.

Separately, a small group of protesters gathered on Wednesday outside the court and shouted “Justice for Aaron Brady” at people going to and from the courthouse, including Caroline Donohoe, the widow of Det Garda Donohoe.

Among the group of protesters outside the court were a number of people associated with the anti-mask movement and on Wednesday they claimed Brady had been “framed” by the Garda and media.

Brady was jailed for a minimum of 40 years while a 14-year concurrent term of imprisonment was also imposed for the armed robbery that was being carried out as Det Garda Donohoe was shot dead.

Married father of one Aaron Brady was found guilty of the capital murder of Det Garda Adrian Donohoe by an 11-to-one majority jury verdict on August 11th.

The 29-year-old with a last address at New Road, Crossmaglen, Co Armagh was also convicted of involvement in the robbery of €7,000 at Lordship Credit Union in Bellurgan, Co ,Louth on January 25th, 2013.

He and his colleague, Det Garda Ryan, were providing an armed escort for Credit Union staff taking money to a night safe.

Brady was part of a five-man gang laying in wait in the credit union car park to steal the cash. Four of the gang members emerged from behind a wall in the car park and Brady ran at Det Garda Donohoe, fatally shooting him.