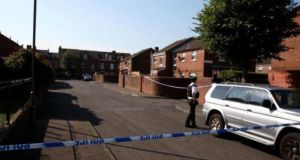 Mr McGuigan, a 53-year-old father of nine, was murdered at his home at Comber Court in the Short Strand area of east Belfast last week, in a suspected feud between former IRA members.

He was shot a number of times in front of his wife Dolores outside their home in Comber Court last Wednesday.

Mr McGuigan was suspected by some in the republican movement of involvement in the killing of former IRA leader Gerard “Jock” Davison in the nearby Markets area of Belfast three months ago.

There has been widespread speculation his killing was a revenge attack by Mr Davison’s associates.

Stormont’s First Minister Peter Robinson has warned Sinn Féin it would face expulsion from the power-sharing Executive if the IRA was responsible.

Sinn Féin has rejected the suggestion of IRA involvement.

Kelly and Thomas Begley planted a bomb in Frizzell’s fish shop in 1993.

Begley, died in the explosion with nine other people.

Kelly was released from prison under the Good Friday Agreement.

Weapons recovered during searches in Greater Belfast have been sent for forensic examination, the Police Service of Northern Ireland (PSNI) said.

The Shankill deaths were among the most notorious of the later years of the Troubles.

IRA bombers intended to target paramilitaries they believed were meeting upstairs in one of the most famously loyalist parts of the city. Instead niine shoppers were killed and dozens more injured.

Begley, also died in the blast in the packed fishmongers after the device exploded prematurely. The attack took place on a Saturday afternoon in October 1993.

A total of 57 people were injured, some seriously. Among them was a 79-year-old woman and two two-year-old boys.

Following the attack, the Ulster Defence Association carried out a series of retaliatory attacks, killing eight people at a Catholic bar in Greysteel near Derry shortly afterwards.