As well as the money seized and bank accounts frozen, the bureau also seized a number of vehicles 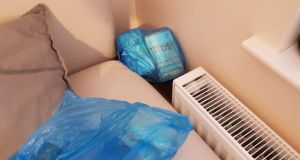 A number of Irish crime gangs, including those involved in the drugs trade, have been laundering money through a gang of Chinese criminals based in the Leinster area, gardaí believe.

A Chinese restaurant is among the foreign-owned businesses gardaí now suspect were being used as part of the laundering operation, which has been under investigation for some time.

However, while the criminal network involving the Irish gangs and the Chinese group has been known to the Garda specialist units for some time, none of the Chinese people suspected of involvement were previously known to law enforcement in the Republic.

The Criminal Assets Bureau (Cab) led a significant series of co-ordinated searches against the suspects in the case on Tuesday in counties Wicklow and Dublin, with a total of 13 searches – five businesses and eight residential addresses.

The bureau used the intelligence it has been gathering during its investigations in recent months to select the properties and targets to search and on Tuesday confiscated over €1 million during a very successful strike against the group.

The bureau search team found and seized €733,499 in cash, which had been counted and folded into bundles and was hidden in plastic bags. Another €301,594 on deposit in a number of bank accounts has also been frozen by the Cab.

Those accounts are held in Irish financial institutions and Cab must now go before the High Court to apply for orders so the cash seized and the money on deposit can be realised for the State.

A total of seven suspects were arrested during Tuesday’s planned operation, including an Irish man who has long been a target for the Garda as well as six Chinese nationals.

Gardaí suspect the Chinese-run money laundering network targeted in the raids has been receiving money from several Irish crime gangs and laundering it for them, through businesses, over a long period of time.

As well as the money seized and bank accounts frozen, the bureau also seized four vehicles, an Audi A4, an Audi A1 and an Audi A6 along with a Honda Civic, along with designer clothing and accessories, mainly expensive handbags, on suspicion they represent the proceeds of crime.

Seizures of the designer clothing and expensive handbags have become more commonplace for Cab and results from changes to the Proceeds of Crime Act allowing the bureau target assets valued at as little as €5,000, rather than the previous €13,000 threshold.

A concerted effort to target lower value assets, as well as continuing to focus on much bigger cases, began in Cab under its former head Pat Clavin, now an assistant commissioner, and is continuing under Det Chief Supt Michael Gubbins, who was recently promoted to the lead role in the bureau.

The Garda National Protective Services Bureau was also involved in the event any vulnerable or at-risk people were found during the course of the searches, which has been a feature of some Garda operations investigating international organised crime. The detectives involved in the raids were backed up by members of the Armed Support Unit and Emergency Response Unit.

The seven suspects arrested on suspicion of money laundering were being held last night under Section 7 of the Criminal Justice Money Laundering and Terrorist Financing Act in Garda stations in Dublin and Wicklow.