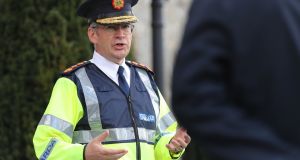 The Garda “found itself again” during the Covid-19 pandemic as gardaí were freed from a range of “ancillary tasks” that always fall to them but have “nothing to do” with its official role, Garda Commissioner Drew Harris has said.

Mr Harris said members of the force were not given any direction or advice about improving the tone they took with the public during the crisis.

Instead, he said, when gardaí were in a position to shed tasks that normally fell to them to perform because of gaps elsewhere in society, the force came into its own and got back to its core policing functions.

“We’ve been called off from our core responsibilities too much,” he said. “There are functions we should be shedding… and I think Covid-19 brought some of these things to a head.”

He added some of the “ancillary tasks” that often fell to gardaí “have very little to do… have nothing to do actually, with the functions that are set out in the Garda Síochána Act”.

Mr Harris did not specify any of the tasks but a list was previously set out in a report by the Commission on the Future of Policing in Ireland.

They included gardaí providing prison escorts and security in courts as well as serving summonses and appearing before the lower courts. The commission said other non-core tasks that took up “enormous” amounts of time for gardaí included attending at minor traffic crashes and verifying the identities of people applying for passports and opening bank accounts.

Mr Harris explained the Garda was looking to shed responsibility for non-core tasks so it could better serve the public. He made his remarks at a hearing of the Policing Authority on Wednesday in response to questions from authority member Vicky Conway.

She said feedback received by the authority from members of the public and community groups had focused on a perceived improved “tone” being taken by gardaí and she asked had members of the force been told to improve this.

Mr Harris said Garda members knew instinctively how to interact with the public and understood that people needed support and reassurance during the pandemic.

“I don’t think this was in any way a change in mental gear for them,” Mr Harris said of gardaí helping the public during the pandemic. “We didn’t have to say to our people ‘you need to change your tone’.

“People understood entirely what was expected of them when we said to them ‘we’re here to reassure the community, we’re here to support them, go and seek out those who may need additional help and make sure they get it, either from ourselves or from other (agencies)’.”

Mr Harris said the recruitment of more civilian Garda staff to cover desk-bound work, which resumed this week, would free up more members for frontline policing.

The hearing heard that while crime had generally fallen during the pandemic, notifications to the Garda about images of child abuse being viewed online increased by 26 per cent in the period from March to May.