Samurai sword examined after attack on mother-of-four in Drogheda 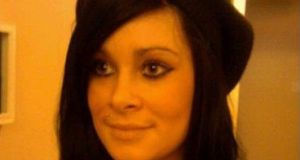 Gardaí are investigating an attack on a young mother-of-four Christina Leslie (above) her home in Co Louth which has left her with life-threatening injuries. Photograph: Bryan O’Brien/The Irish Times

Gardaí investigating an attack on a young mother-of-four in her home are searching for a man regarded as the chief suspect in the case.

Christina Leslie (28) is fighting for her life in Beaumont Hospital, Dublin, after being transferred there due to the severity of head injuries she received in the attack at the weekend.

Gardaí are examining a samurai sword in a bid to establish if it was used was a weapon against Ms Leslie.

She suffered extensive injuries during the incident.

When the gardaí arrived on the scene they found Ms Leslie very badly injured and large amount of blood in several areas of the property.

She was treated at the scene by paramedics and then taken to Our Lady of Lourdes Hospital in Drogheda.

However, her condition deteriorated and she was transferred to Beaumont for specialist treatment of for her head injuries.

Her family have said her injuries caused her brain to swell and she required surgery on her skull to relieve the pressure.

They have expressed their belief that a samurai sword was used to inflicted her head injuries.

Gardaí have interviewed the injured woman’s relatives to determine if she was in dispute with anyone who may want to harm her.

This, coupled with witness accounts gathered-to-date, have helped gardaí identify a suspect in the case.

Gardai want to speak to him about his knowledge, if any, of the attack that has left Ms Leslie critically injured.

The house in Co Louth was sealed off immediately after gardaí arrived last Friday.

It has remained sealed off since and has undergone examination by members of the Garda Technical Bureau.

Garda sources said there was a large amount of blood in several places in the house. A number of items, including a sword, have been taken from the property for further analysis.

The Garda investigation is being run from Drogheda Garda station.

Ms Leslie’s four children are being cared for by members of her family.