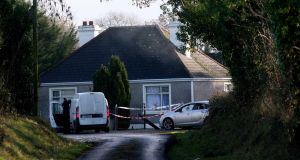 The house outside Strokestown, Co Roscommon, where a group of men arrived early on Sunday and clashed with security personnel. Photograph: Brian Farrell

A farmer who lived in the house in Co Roscommon which is at the centre of a repossession controversy has unpaid debts going back years.

He was also the subject of a large tax settlement in 2015, public records show.

Anthony McGann, of Falsk, near Strokestown, Co Roscommon, is the registered owner of five land folios in the Land Registry, all of which have had the same judgment orders registered against them.

Judgments are rulings by a court that a debt is owed. They are often registered by a bank against a debtor’s property on public registries, in part to ensure the debt is repaid from the proceeds of any subsequent property sale.

The recent seizure of property owned by Mr McGann is being linked locally to a debt to KBC bank, although the bank has not as yet confirmed that. The KBC debt is not cited on the land folios in the Land Registry.

“We are aware of the situation in Roscommon and that the matter is being dealt with by An Garda Síochána. Unfortunately, we cannot provide comment on individual cases,” said a bank spokesman on Monday.

The house is at the centre of a repossession controversy after dozens of masked men confronted security guards occupying the home outside Strokestown early on Sunday.

During the incident three security guards were seriously injured, four vehicles were set alight and a dog was subsequently put down when masked raiders targeted them at the house on Sunday morning.

Online footage of the eviction of two brothers and a sister from their home near Strokestown last Tuesday showed security men dressed in black, forcibly removing the family from the house.

The eviction has sparked an angry response with many people objecting to the involvement of a private security firm.

Mr McGann lived in the Co Roscommon house with his two siblings, David and Geraldine, but is the sole owner of five folios of land in Co Roscommon against which judgment orders have been registered.

The most recent registered judgment, in favour of the Irish arm of a US debt recovery business, Cabot Asset Purchases (Ireland) Ltd, was obtained in the Circuit Court in January.

Cabot’s Irish subsidiary has purchased Irish debt and also collects debt on behalf of clients. It collects approximately €5 million a month from Irish debtors, according to its website, but a spokesman has confirmed that it is not connected with the asset seizure in Co Roscommon.

In 2015, the Revenue Commissioners entered into a settlement with Mr McGann in respect of a tax debt of €429,501, of which more than half was interest and penalties.

The original debt was €177,388 and was in respect of the under-declaration of VAT. It is not known what sales the VAT debt relates to. The settlement arose after the Revenue conducted an audit on Mr McGann.

The earliest court judgment registered against Mr McGann’s Co Roscommon property in the Land Registry files was in 1997, when an amount of £6,994 (€8,853) was at the centre of a dispute with ACC Bank in the Circuit Court. It appears the debt was cleared in 2002.

However a debt of €37,960 with ACC Asset Finance, which was the subject of a High Court order in 2009, remains registered against Mr McGann’s interest in the Co Roscommon land.

In the same month in 2009, a Co Roscommon business called Hanly Brothers Ltd registered a debt of €18,236 after securing a Circuit Court order against Mr McGann. That debt remains outstanding, the registry records indicate.

The size of these latter outstanding debts is not disclosed in the Land Registry files.

In 2012 a judgment mortgage was registered against the Co Roscommon property by ICS Building Society, following an order in the High Court. The land registry records indicate that debt has not yet been cleared.