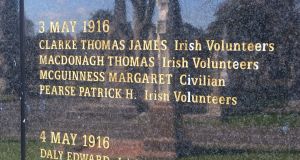 A section of the wall after paint was taken off it. Photograph: Colm Keena

The Church of Ireland Archbishop of Dublin, Michael Jackson, has expressed sorrow about the throwing of paint over the remembrance wall in Glasnevin Cemetery at the weekend.

The wall,which contains the names of all those who died in the 1916 Rising, Irish and British, military and civilian, was defaced with green and white paint.

The paint has since been removed by cemetery staff but the process has led to the gold inlay being removed from some of the lettering.

The inlay is completely missing from some of the names and only slightly, or not at all from others. The names damaged include those of civilian, rebel and army casualties.

The dead are listed according to the date they died, with the names within each date listed alphabetically. The paint was thrown over the wall so that it damaged the names of all types of casualties. The first P in the name of the leader of the Rising, Patrick Pearse, is among the lettering which needs repair.

The inclusion of the names of British army casualties on the wall was the subject of controversy last year. Over the coming years the names of all casualties from the War of Independence and the Civil War will be added.

Archbishop Jackson expressed sorrow at the news that the Necrology Wall had been vandalised.

“I was invited to take part in the Inter Faith Act of Worship for the dedication of the wall erected during the centenary of 1916,” he said.

“ It is a historic record of all those who died in the rebellion from whatever perspective they came - we remembered them all. The families involved in this initiative showed great courage and I express sadness and distress for them at this time.”

The trust which operates the historic graveyard has said it is in contact with gardaí about the incident. “This was an act of callous vandalism,” it said in a statement.