Release of report on Garda would ‘inevitably’ cause unrest 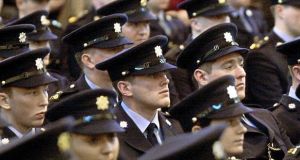 Garda management is considering proposals in a report, drawn up by Deloitte at a cost of €275,000, which they say could herald “a transformation in workplace practices”.File photograph: The Irish Times

A consultancy report on planned changes within the Garda would “inevitably” cause industrial relations unrest if released in an “uncontrolled manner”, the force has said.

Garda management is considering proposals in the report, drawn up by one of the world’s largest accountancy firms, Deloitte, at a cost of €275,000, which they say could herald “a transformation in workplace practices”.

It was completed in May, after six months’ work, and is one of several reports and contracts commissioned from external consultants – at a cost of tens of millions of euro to the public purse – which the Garda is largely refusing to disclose.

Also among them are two reports on how the force procures goods and services, which cost more than €70,000.

Asked to release them under Freedom of Information (FoI), the Garda said it could find one and did not have to release the other.

Before his appointment, Garda chiefs commissioned Deloitte to carry out a review of human resources and staff development within the force.

Supt Sharon Kennedy, of the force’s FoI unit, declined to disclose it.

“The harm that will ensue from the release of the document can realistically be expected to be the breakdown of trust in the management,” she said.

Supt Kennedy said its release “in an uncontrolled manner and seemingly without considering its impact upon the relevant affected staff . . . will result in an adverse effect on the ability of management to carry out their functions.”

No decision has been taken yet on the proposals contained in the report but their “unexpected” disclosure “will inevitably result in industrial relations unease within the affected sections”.

This would “impact significantly upon the ability of Garda management to carry out their functions” and “inhibit the smooth implementation of proposed change”, Supt Kennedy added.

Measures proposed “could require a transformation in work practices by the individual, team and the organisation”.

The Garda also paid Distinctions Coaching and Consultancy €84,280 for “executive coaching” between 2016 and present. Asked for details of the work, the force’s FoI unit said it would cost several hundred euro to retrieve the records.

An ongoing contract with consultants Accenture for work on implementing the Schengen Information System – a huge European database on terrorists, criminals and missing persons – will cost €21.8 million between December 2016 and December 2021.

A Garda internal audit report last year raised concerns about multimillion-euro payments made in advance to the consultants for IT services, despite a lack of verified invoiced hours.

The report found elements of the contract with Accenture were “not best practice” and in particular there was a lack of a paper trail over a key financial agreement between the force and the firm.

Gartner, another consultancy firm, has been paid €72,600 since 2016 for advice to the Garda on new rules for procurement by State bodies and agencies.

Asked for its findings, the Garda said it was “unable to locate a copy” of a report it sent to the company.

A related report Gartner sent to the force was not subject to FoI because it “does not relate to administrative records pertaining to human resources, finance or procurement”, said Supt Kennedy.

A cultural audit by consultants PwC, which found a culture of silence and poor transparency in the force, cost €500,000; a public attitudes survey by Amarach cost €274,536; advice on the outsourcing of Garda safety cameras by Bearingpoint Ireland cost €71,500.

A review of the Garda’s internal audit section by Newry-based Kosi Corporation cost €8,250.

The force refused to disclose the cost of a temporary contract with Vantage Resources for IT staff.