There were loud chants of ‘sue me, Paddy’ from the crowd

Further rallies have taken place in Belfast and Dublin to express solidarity with all victims of sexual crime. 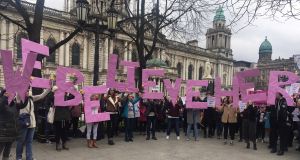 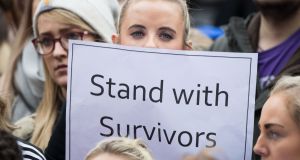 Further rallies have taken place in Dublin and Belfast to express solidarity with all victims of sexual crime.

Several thousand people marched through Dublin city from Dame Street to the Department of Justice on St Stephen’s Green.

As was the case in a rally last Thursday in the city, many carried home-made placards with “I stand with her”, “I believe her” and “#MeToo” written on them.

Similar events have taken place in a number of cities since the conclusion last Wednesday of the high-profile Crown Court trial of Ireland and Ulster rugby players Paddy Jackson and Stuart Olding who were both found not guilty of raping a then 19-year-old woman in 2016.

Speaking at the rally on Saturday afternoon, Noeline Blackwell, chief executive of the Dublin Rape Crisis Centre said the organisation had received “thousands” of donations in recent days.

She said no proper statistics had been published on sexual violence since 2002, 16 years ago, adding people needed to understand the size of the problem in order to tackle it.

Changes were also required to the legal system so that complainants were treated sympathetically in the court room, she said.

There were many calls for an end to a “toxic” culture of masculinity fed by unrealistic depictions of sex in pornography.

There were also loud chants of “sue me, Paddy” from the crowd, later echoed by speakers from the podium.

The reference was to a decision by lawyers for Mr Jackson - announced on Friday - to sue Labour Senator Aodhán Ó Riordáin over an alleged defamatory tweet which was subsequently deleted. The lawyers also warned of further action against anyone who posts defamatory comments about their client online.

There has been a defiant response also from some Twitter users who have started using the hashtag #SueMePaddy.

Speakers at the Dublin event also included Solidarity TDs Ruth Coppinger and Bríd Smith, Laura Fitzgerald from Rosa (for Reproductive rights, against Oppression, Sexism and Austerity), Roseanna Shanahan of the organisation Consent At UCD and Hazel Larkin of Action Against Sexual Violence Ireland, formed in the past two days.

Earlier in Belfast, around 250 people gathered outside Belfast City Hall. Standing in front of bold pink lettering spelling out “We believe her”, young women took to a megaphone to voice their concerns about the treatment of women in the North and beyond.

She said “94 per cent of reported rapes end with no prosecutions and the majority of rapes are not reported at all for fear of not being believed.

“We need to change the system and we need to have a discussion about consent and the way we achieve that is by demanding it.”

She said there was now a number of related campaigns against violence towards woman, including the #MeToo and Ni Una Menos (“Not one [WOMAN]less”) movements.

“What we are doing is part of an international wave of resistance and we absolutely need to keep the momentum going,” she added.

Saoirse Kirker (26) from Bangor, Co Down said she came to the rally to support other women.

“When people try to silence us it is important we come out and speak and it’s about time issues like this got addressed.”

“We need to take a stand now to ensure we receive a secular, inclusive fact based sex education,” she said.

Office worker Mal McGinley (32) from Belfast said he wanted to attend the rally to show solidarity with women.

“There is a culture of pervasive misogyny throughout society,” he said. “I am from a background like that, a laddish background. You don’t notice it; it is insidious.

“Today is about turning up to show women, not from a ‘not all men’ perspective, but to show solidarity that people are listening and do care.”

Mr McGinley added on the way to the protest in Belfast he noticed graffiti reading “#SueUsPaddy” painted on a wall. He said the idea Mr Jackson’s legal team would monitor every social media post was “ridiculous”.

“You can’t silence everybody as this protest shows,” he said.