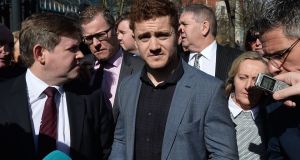 Paddy Jackson’s legal representative has said he intends to sue Labour Senator Aodhán Ó Riordáin for defamation after the politician sent a tweet in the wake of the verdicts on Wednesday. Photograph: Pacemaker Press

The Attorney General of Northern Ireland is continuing to examine if online comments from a juror in the Belfast rape trial constitute contempt of court.

The remarks, which appeared in the comments section of the website Broadsheet.ie under a story about the acquittal of Ireland and Ulster players Paddy Jackson and Stuart Olding, described the case and some of the reasons the jury found the four accused not guilty.

They also criticised the police investigation and defended the length of time the jury spent considering a verdict.

On Thursday, the North’s most senior judge, Lord Chief Justice Declan Morgan referred the matter to the Attorney General John Larkin to assess if the comments were in breach of the trial judge’s order that jurors should not discuss their deliberations.

The Lord Chief Justice’s office also ordered the juror to remove the comments. They were later removed by website’s administrators.

Yesterday evening a spokesman for the attorney general’s office said it is continuing to examine the matter and that it is likely no decision will be taken until at least next Wednesday due to the long weekend.

The juror made a further posting on the Broadsheet.ie website yesterday defending their comments:

“The comments I made referring to the case were within the parameters of the judge’s discharge to all the jurors. The one thing she said was: Do not reveal conversations or discussions that occurred in the jury room.”

In a separate development, Mr Jackson’s legal representative has said he intends to sue Labour Senator Aodhán Ó Riordáin for defamation after the politician sent a tweet in the wake of the verdicts on Wednesday.

He had praised the complainant at the centre of the case and questioned the result. He later deleted the message.

*On Thursday in relation to Mr Ó Riordáin’s tweet a spokesman for the Labour party said: “He knows it was wrong, he put his hands up and deleted it. He reacted before we got to him... he was reacting to the verdict when it came out.”

He added that social media guidelines have been given to all public representatives and party members who are active online.

The spokesman refused to comment on the actions of Mr Jackson’s solicitors KRW Law.

A statement issued by KRW Law on behalf of Mr Jackson said: “During the course of the trial our client and his co-accused regularly sought the protection of the court against the prejudicial excesses of social media.

“Despite Wednesday’s resounding declaration, Patrick now finds himself resorting to the civil courts in order to seek protective action.

“Regrettably, KRW Law has had no option but to issue notice of intention to sue Senator Aodhán Ó Riordáin for defamatory comments made by him in the immediate aftermath of the jury’s verdict.”

Senior Associate Marie Hans of KRW said: “We will not hesitate to repeat similar legal action against anyone, who deliberately or otherwise, sees fit to attack our client. We are examining carefully every item of social media commentary which seeks to challenge the integrity of the jury’s full endorsement of our client’s innocence. High court proceedings will issue shortly in both Belfast and Dublin”.

Meanwhile, the PSNI has confirmed it has interviewed two people on suspicion of identifying the complainant in the case on social media. Complainants in rape trials are entitled to lifelong anonymity under UK law.