PSNI welcomes move to clarify rules on exercising during pandemic 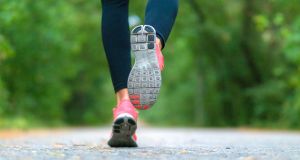 In the Republic, a clearly-communicated 2km limit on movement from peoples’ homes for exercise has been in place for weeks. Photograph: iStock

The Police Service of Northern Ireland (PSNI) has welcomed a move by the Northern Ireland Executive to clarify the circumstances in which a person can leave the house to exercise during the pandemic.

On Friday night a statement from Stormont’s Executive Office said clarity would be provided, including on reasonable travel to exercise.

The statement said: “For example, a drive to a safe space or facility would be permitted.

“However, taking a long drive to get to a beach, or resort where numbers of people may gather is unlikely to be regarded as reasonable, even for exercise.”

It is thought information on exactly what this means will be provided this week.

So far the PSNI has issued 358 penalty fines to members of the public for breaching the rules on social distancing, with a handful relating to travel for exercise.

Previously the PSNI said its legal advice was driving to exercise was a breach of the rules.

While the government has pushed a message to stay at home except for essential journeys, the PSNI has faced some accusations of misinterpreting the legislation up to this point over whether driving to exercise is allowed.

Assistant Chief Constable Alan Todd said: “We said in our statement earlier this week that greater clarity in the regulations would have undoubtedly made our job easier to police this current health crisis.

“Therefore we welcome today’s announcement and the clarity that the change to the regulations and any associated guidance will bring to the public and police officers alike.”

In the Republic, a clearly-communicated 2km limit on movement from peoples’ homes for exercise has been in place for weeks.