PSNI officer hit by lorry in manhunt after ATM theft 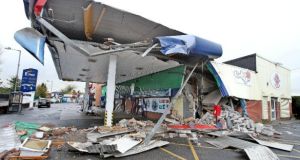 The scene of destruction after an ATM was ripped from a petrol station near Newry, Co Down. Photograph: Alan Lewis

A PSNI officer involved in a manhunt was deliberately struck by a lorry in south Armagh on Friday afternoon, in an attack police are treating as attempted murder.

Police are searching for two men following the theft of a cash machine from a filling station on the outskirts of Newry.

Supt Simon Walls said: “Police were travelling along the Mullaghduff Road, Cullyhanna, earlier today when they encountered a suspicious lorry transporting a car. As one of the officers exited the police vehicle to speak to the driver, the lorry was driven at speed directly at the officer, striking him and pinning him between the lorry and a police patrol vehicle. The lorry then fled the scene.

“The officer’s colleagues rushed to help him, providing emergency first aid. The PSNI helicopter was then used to transport the officer to hospital in Belfast.”

The constable is undergoing medical assessment for the serious injuries he sustained, that are not thought to be life threatening.

“We are keen to locate the driver and the lorry involved, described as low loader with a white cab, a yellow bumper, a red low loader body and carrying a white or silver vehicle,” the senior officer added.

Considerable structural damage was caused to Simon Gregory’s filling station on the Camlough Road when it was rammed by a mechanical digger and an ATM was stolen during the early hours of Friday morning.

It is the second type of attack of this nature on the business in six years.

Following the theft, officers from An Garda Síochána, on patrol from Carrickmacross station, discovered an ATM after a search of a white van in Drumass, Inniskeen.

A man in his 20s was arrested at the scene but another two men fled on foot.

PSNI Detective Constable Sarah Lyttle said heavy machinery was stolen from a building site in the Camlough Road area at around 3.30am on Friday for use in the raid.

The digger was subsequently set on fire, blocking the road, and causing traffic disruption.

Newry and Armagh Ulster Unionist MLA Danny Kennedy condemned the attack on the business near Bessbrook, after the ATM was replaced in April.

“This is the second similar attack in six years on a well-respected family run business,” he added.

Mr Gregory told the BBC it took him six years to get a company to agree to supply him with a new ATM.

“I’ll have to go again, I’m not going to let them beat me, I’m going to try for another machine,” he said.

DC Lyttle appealed for witnesses or anyone with information to contact detectives in Ardmore on 101 or by calling the Crimestoppers charity anonymously on 0800 555 111.