Second death in 24 hours of inmate in Irish jail 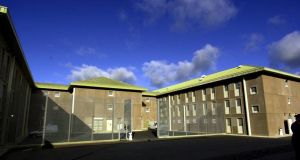 A prisoner was found unresponsive by prison officers at the Midlands Prison in Portlaoise at 7.38am on Saturday. Photograph: Bryan O’Brien/The Irish Times

An inmate has been found dead in his cell at the Midlands Prison in Portlaoise.

The prisoner was found unresponsive by prison officers at 7.38am on Saturday, an Irish Prison Service spokesman confirmed.

The man was later pronounced dead.

The man’s details will not be publicly released until all family members have been informed of his death.

Gardaí have been informed and the Prison Service will begin an investigation into the circumstances surrounding his death in the coming days.

A post mortem will be carried out to determine the cause of death.

This morning’s incident is the second death in an Irish jail in 24 hours.

Douglas Ward was found dead in his cell at Mountjoy jail in Dublin on Friday morning. He had been serving a 13 year sentence, with three years suspended, for the manslaughter of 18-year-old Niall Dorr in Dundalk in 2010.