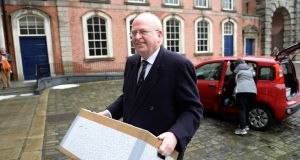 The chairman of the Charleton tribunal has said he will not go to the High Court to require journalists to answer questions where they claimed journalistic privilege because it would be “absolutely futile”.

The tribunal is looking at allegations by Supt David Taylor that he was directed when he was garda press officer in 2013 and 2014 to smear whistleblower Sgt Maurice McCabe. Former commissioners Martin Callinan and Nóirín O’Sullivan deny there was any smear campaign.

On day 97 of the inquiry barristers for some newspapers told Mr Justice Peter Charleton journalistic privilege was a social good and essential to the right of free expression, and a basic condition of a free press.

Shane English BL, on behalf of the Irish Examiner, said identifying a source would have a chilling effect and waiving privilege could deter future sources from coming forward.

Mr Justice Charleton said that if he was to order journalists to answer questions from the tribunal “there will be no change because the manner in which they resisted answering the question convinced me that any order I made would be absolutely futile.”

Journalistic privilege was claimed by three Irish Examiner journalists and one Irish Mail on Sunday journalist.

In submissions to the chairman Michael McDowell SC, on behalf of Sgt McCabe, said the tribunal had made every reasonable effort to inquire into whether there was negative briefing of journalists by Supt Taylor and the two former commissioners.

“Journalists who refused to answer questions properly put as to whether they had such discussions do not have any state-able journalistic privilege which would justify such a refusal.”

“If there is no privilege, there is no rule against drawing inferences from a refusal to answer a question,” Mr McDowell said.

“My submission is if a journalist is asked did you have ‘off the record’ conversations with Supt Taylor concern Sgt McCabe, and refuses to answer on a purported basis of privilege which does not exist, this tribunal is entitled to draw whatever inference is apposite from a failure to answer that question.”

Mr McDowell said that Supt Taylor was entitled to have the questions answered when he had waived his privilege.

Mr McDowell said he was not saying the tribunal should refer questions to the High Court as it would serve no useful purpose and delay the completion of this tribunal’s proceedings.

“There is no need to refer to the courts because it is so blindingly obvious that journalistic privilege is not involved, and there is no reason the tribunal should be delayed or frustrated by lengthy court proceedings,” Mr McDowell said.

John Ferry BL, for Supt Taylor, said that some journalists had taken an “absolutist position” on journalistic privilege, and the interests of Supt Taylor outweighed issues of privilege where no details have been given of what privilege was being claimed.

Mr Ferry said that Supt Taylor had identified himself as a source and provided waivers, and no journalistic privilege applied.

“The right of Supt Taylor to protect his good name trumps the claim of journalistic privilege in those circumstances,” Mr Ferry said.

Mr Ferry said similar to Mr McDowell, he was arguing that an inference should be drawn that Supt Taylor’s evidence, as the only evidence about his interactions with some journalists, was the version that should be accepted.

Mr Ferry said that in the event the tribunal did not draw an inference, Supt Taylor was entitled to have all avenues exhausted.

Shane English BL said that irrespective of waivers given by Supt Taylor and the former commissioners, his clients would not answer questions about their sources.

Mr English said that the journalists wished to preserve the free flow of information, and identifying a source would have a chilling effect. Journalistic privilege was a social good and essential to the right of free expression, and a basic condition of a free press.

Waiving that privilege could deter future sources from coming forward, undermine the ability of journalists to to provide accurate information, and put their livelihoods at risk.

“They have appropriately invoked their lawful entitlement to journalistic privilege,” Mr English said.

Tom Murphy BL, on behalf of the Irish Daily Mail and Irish Mail on Sunday, said his clients were also claiming privilege. Mr Murphy said that given other evidence available to the tribunal, it was not necessary for the tribunal to require journalists to answer any further questions.

John Fitzgerald BL, on behalf of An Garda Síochána, said that for the tribunal to draw inferences from a refusal of journalists to answer questions would require it to leap to conclusions.

He said that Supt Taylor’s evidence was “utterly devoid of supporting evidence”, and there was no no electronic or documentary evidence to support his allegations.

One of the few details Supt Taylor did provide was a list initially of nine journalists, which then grew to eleven, and which, on Wednesday, “extraordinarily” became twelve.

Mr Fitzgerald said that none of the journalists supported Mr Taylor’s evidence, which eight denied, with four claiming privilege.

Mr Fitzgerald said An Garda Síochána regretted the position taken by the journalists, which it believed was mistaken in law, but said it was not necessary for the chairman to go to the High Court.

Tribunal barrister Diarmaid McGuinness SC said that the tribunal legal team will consider whether any witnesses need to be recalled, following which final submissions would be heard. The chairman said he would meet with his legal team on Monday to decide on the next steps to take.

Judge Charleton also outlined 20 issues he had to consider in preparing his report, and which barristers should address in making their final submissions.