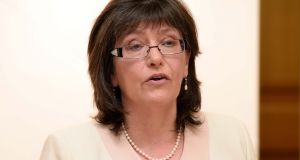 The Garda policing plan for this year outlined by Garda Commissioner Noirin O’Sullivan will be the last such plan the force will draw up itself, the head of the new Policing Authority has said.

At its first meeting senior members of the authority were given a presentation on the plan for the current year by the commissioner.

Authority chairperson Josephine Feehily said the information imparted would prove invaluable because her agency would not only approve future policing plans but would also be considering policing priorities, resources and performance targets.

Ms Feehily said at Thursday’s inaugural meeting of the new authority, the commissioner had set out her plans for a “much transformed Garda Síochána”.

Ms Feehily made her comments at a media event in Dublin on Friday marking the commencement of the authority’s work, one day after its first meeting.

The Policing Authority has been established as an independent body to oversee the performance of the Garda Síochána in relation to policing services in Ireland.

It is also intended to act as a buffer between policing and politics.

The Garda Siochana Ombudsman Commission (Gsoc) will continue to investigate complaints made about Garda members. And the Garda Inspectorate will continue to examine policing policies and practices with a view to recommending reforms.

“Effective policing is crucially important for any society,” Ms Feehily said in her first remarks as Policing Authority chair.

“In order to be effective, it must enjoy a very high standard of public confidence. Our job in the authority is essentially to enhance public confidence by independently overseeing the performance of the Garda Síochána in relation to policing.

“There are many aspects to oversight of performance and to enhancing public confidence and Garda accountability needs to be seen in a broad context which recognises those things that work very well as well as those which could work better.

“It will take time for the authority to establish itself fully but we are determined to move as quickly as possible on some critically important changes, such as discussing policing performance with the Garda Commissioner in public so that citizens can more easily hear about the work being done by the gardaí, taking responsibility for senior appointments and establishing a Garda Code of Ethics as required by law.

“I am privileged to be joined on the authority by experienced and distinguished colleagues to begin our work. Their commitment and enthusiasm convinces me that we can advance our first set of business priorities quickly.”

She said the recent anniversary of the shooting dead of Det Garda Adrian Donohoe was a reminder of the challenges faced by Garda members on the daily basis across the country. When she and her senior team had met with Commissioner O’Sullivan and her senior officers, they have conveyed their sympathies.