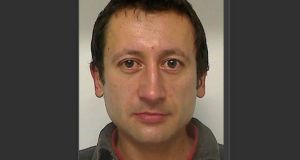 Michal Kurek, a Polish murder victim whose body was found earier this month in north Dublin. Photograph: An Garda Síochána

A man stabbed dozens of times in a fatal frenzied knife attack before being dumped by the roadside was homeless, the Garda has said.

His killing remains unsolved and gardaí in north Dublin are seeking the public’s assistance in their bid to solve the crime.

The remains of Michal Kurek were found by the side of a road in Grange, Ballyboughal, north Co Dublin. The area is an isolated one not covered by CCTV and with mostly local traffic only.

Originally from Poland, Michal Kurek (34) had lived in Ireland for many years.

Mr Kurek’s body was discovered last Friday week, August 4th, at about 10.40am.

The remains were discovered in a laneway off the Oldtown Road, the R129, about 1km outside Ballyboughal, near Naul village.

Detectives believe he was murdered elsewhere and his body was then left by a ditch on the country road. He had been stabbed dozens of times and gardai suspect his body was dumped in panic.

Gardaí are working on the theory Mr Kurek’s remains had layed on the roadside for only a short period before they were discovered. And they also believe Mr Kurek was dead a matter of hours before his body was dumped.

They are now seeking anyone who may have since him the day before his body was found or early on the same day the discovery was made to contact them.

The deceased was homeless at the time of his death and spent time in Dublin city centre and in the west of the city.

Gardaí have made a number of public appeals since the gruesome murder came to light and have today again urged anyone with information to come forward.

They say as Mr Kurek had been homeless for periods they are hopeful members of that community may be able to aid the murder inquiry.

“Michal was homeless during recent months and is known to have spent time in the Blanchardstown-Ongar area and in Dublin city centre.

“Garda resources are not being spared in this investigation and several hundred lines of enquiry are being examined.

“We have received massive assistance from the public as well as very valuable information from the local community, the Polish community and the homeless community.

“However, we are still appealing for anyone with information to come forward.”

The Garda said a family liaison officer had been appointed to assist Mr Kurek’s family back in Poland and keep them updated about the murder probe.

Anyone with information on Mr Kurek, especially those who saw him the day before his body was found or earlier on the morning he was found dead, can contact Balbriggan gardaí on (01) 802 0510 or the Garda Confidential Line on 1800 666 111.