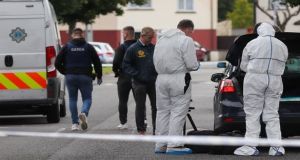 A man in his 70s has been killed in an apparent stabbing attack followed by an early morning siege in north Dublin, gardaí have said.

They were called to the scene of the suspected stabbing outside a house in the Whitechapel Road area of Clonsilla, near Blanchardstown, at about 5.55am.

The victim was found “fatally injured following an altercation where he received a number of apparent stab wounds”, said a Garda spokesman.

Gardaí said a man in his 40s barricaded himself into another house nearby follwing the incident.

Protocols for dealing with a de facto siege were implemented, including a media blackout on all reporting of what they described as a “sensitive and volatile incident” as it was ongoing.

Gardaí said the “barricade incident” was resolved by 11:40am. A suspect was arrested under section 4 of the Criminal Justice Act.

The man is being questioned at Blanchardstown Garda station.

The scene of the suspected stabbing has been sealed off for a technical examination.

“It is an area you’d never think something like this would happen,” he said.

“It is very well-looked after and most people who live there have been there for a long time. They all know each other. The people I’ve been talking to are devastated by the incident.”

Fr John Owen, priest at nearby St Philip the Apostle church at Mountview, said he believed the victim was “an old age pensioner”.

“People will be totally shocked, especially if the victim was an old age pensioner,” he said. “There are a number of houses there with pensioners living in them.”

Gardaí have appealed for anyone with information in relation to this incident to contact them at Blanchardstown 01-666 7000 or the Garda confidential line on 1800-666 111.