One in five rely on neighbours for home protection 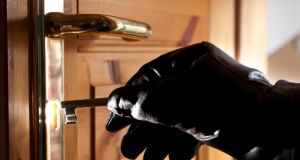 A survey has found that 23 per cent of people in Dublin do not to lock their front door. Photograph: Getty Images.

A fifth of Irish people rely on neighbours and family to look after their unattended house rather than buying an alarm, new research has shown.

A survey of 1,000 people conducted by Millward Brown revealed that 47 per cent of respondents’ homes are not equipped with an alarm, while 17 per cent of people do not lock their front door when leaving the house.

The results also indicate that those who don’t have an alarm are more relaxed and confident in their home than those who have purchased protective features.

The poll, which was carried out in March on behalf of Liberty insurance, found that residents in Ulster and Connacht are least likely to have an alarm at 33 per cent, while alarm ownership in Dublin and Leinster stands at 64 per cent.

However, Dubs are the least likely people to secure their premises while out, with 23 per cent electing not to lock the front door compared to 17 per cent in the rest of Leinster, 13 per cent in Munster and 14 per cent in Connacht and Ulster.

It proves somewhat reflective of a general trend whereby a quarter of people with alarms choose not to lock the front door before leaving, compared to 10 per cent of people without alarms.

A third of those who have installed alarms do not activate them when away.

“Householders should not be complacent when it comes to security; taking even the simplest measures will help people feel confident when leaving their homes unattended.”

Cases of burglary have increased by five per cent over the last year to date compared to the same time period in 2013, according to the Central Statistics Office.

Recent evidence shows that homeowners in Louth are the most likely to be burgled, while rates of burglary have dropped dramatically in western counties of late.