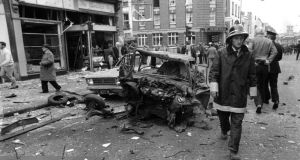 A wrecked car near the explosion in Talbot Street, Dublin, in May 1974, a bombing in which Robin “the Jackal” Jackson is believed to have been involved. Photograph: Keystone/Hulton|Archive

The Northern Ireland Police Ombudsman Dr Michael Maguire is investigating complaints from 24 families over how the RUC inquired into more than 70 loyalist killings during the Troubles.

The investigations are related to claims in the newly published book by Anne Cadwallader, Lethal Allies, that between 1972 and 1976 more than 120 people were killed by loyalist paramilitaries, many of them allegedly working in collusion with the RUC and the Ulster Defence Regiment.

“A total of 24 families have made direct complaints to the ombudsman while the PSNI have also referred cases to us,” a spokesman for the ombudsman said last night.

He said a number of these complaints referred to multiple killings and included the 1974 Dublin and Monaghan bombings, in which 33 people were killed, and the 1975 Miami Showband gun-and-bomb attack in which three members of the band were killed, along with two of the UVF gang that targeted them.

Cadwallader is a former journalist and now a Pat Finucane Centre case worker in Belfast. Her book focuses on the UVF Glennane gang that operated from Co Armagh, and on other loyalist groups that were based in mid-Ulster.

The book is largely based on investigations carried out by the Historical Enquiries Team (HET), a division of the PSNI, and on other official reports and papers.

‘Campaign of terror’
A number of quotes from HET inquiries reported in the book support the collusion allegation, including one from the HET’s examination of the killings of Seán Farmer and Colm McCartney in 1975: “Members of the nationalist community, and relatives of the victims in cases such as these, are convinced that investigations were not rigorously conducted in a deliberate effort to conceal security forces’ involvement and perpetuate a campaign of terror by loyalist paramilitaries against Catholic citizens. The HET is unable to rebut or allay these suspicions.”

Former RUC special branch officer and assistant chief constable Raymond White yesterday acknowledged some officers had colluded with paramilitaries but said it was a small number.

“Obviously [the book] presents a very damning picture and there’s nobody more ashamed than myself and my colleagues,” he told BBC Radio Ulster.

Conor Murphy, the Sinn Féin MP for Newry and Armagh, said the Glennane gang was “made up of members of the UDR, the RUC and UVF and was as a matter of policy involved in the sectarian murder of over 100 people”.

‘Failure to act’
Policing board member and SDLP MLA Dolores Kelly said the book revealed “just how deep and how high collusion ran in the security forces . . . The failure to act on reports of collusion arguably prolonged the Troubles.”

Danny Kennedy, Ulster Unionist MLA for Newry and Armagh, said: “People in Northern Ireland know the truth that the IRA were responsible for the majority of murders during the Troubles and they bear the greatest actual and moral responsibility for loss of life.”