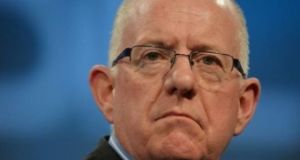 Minister for Justice, Charlie Flanagan has said legal advice he received was that it would be possible for the Commission of Investigation to start hearing evidence on certain aspects relating to the gardaí handling of complaints in the 1980s without prejudicing Bill Kenneally’s right to a fair trial. File photograph: Alan Betson

Minister for Justice, Charlie Flanagan has confirmed that he plans to bring a memo to Cabinet on Tuesday, setting out the terms of reference for a Commission of Investigation into the handling by gardaí and other state agencies of complaints against Waterford sports coach, Bill Kenneally.

Mr Flanagan confirmed that if he obtains approval from his Cabinet colleagues for the Commission of Investigation he would hope that retired judge Barry Hickson would start hearing evidence from witnesses within a number of weeks.

“I expect to bring a memo to cabinet on the Commission of Investigation and I am very keen that it will be fully established at the earliest opportunity, acknowledging that there are some criminal cases ongoing [involving Mr Kenneally],” said Mr Flanagan.

“But that said, I am really keen to have the commission established at the earliest opportunity and I will be making an announcement soon in relation to it.”

Mr Kenneally is currently before the courts on 99 charges relating to alleged sexual assaults on three boys in Waterford in the 1980s and he is due back before Waterford Circuit Criminal Court on Wednesday when it’s expected that a trial date will be fixed.

But Mr Flanagan said the legal advice he had received was that it would be possible for the Commission of Investigation to start hearing evidence on certain aspects relating to the gardaí handling of complaints in the 1980s without prejudicing Mr Kenneally’s right to a fair trial.

“I am satisfied that the Commission of Investigation under Judge Barry Hickson can begin looking into certain aspects of the case over the next few weeks,” said Mr Flanagan when questioned about the issue when officially opening the new €34.8 million criminal court complex in Cork.