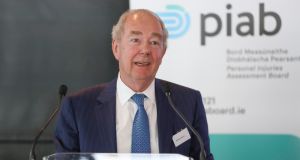 People who do not believe there is a compensation culture in Ireland should join “the flat earthers” or climate change deniers, former High Court President Nicholas Kearns has said.

Mr Justice Kearns, Personal Injuries Commission (PIC) chairman, was speaking at a conference organised by the Personal Injuries Assessment Board (PIAB), where he called on politicians to “step up” and do something about rising insurance costs and claims which are leading to the closure of businesses.

“Those who deny there is any significant problem should go join perhaps the Flat Earth Society or the climate change deniers,” he said.

Calling the issue “an immediate and urgent problem”, Mr Justice Kearns raised the case of Linda Murray, who has said she faces losing her Co. Meath play centre business after her insurance premiums rose from €2,500 to €16,500 in just five years.

Mr Justice Kearns said the Aquadome, a indoor waterpark in Tralee, could only get insurance cover by agreeing to pay the first €183,000 of any claim awarded against them. Six other leisure centre businesses have closed or face closure in the near future due to insurance costs, he said.

Mr Kearns recently completed a report which found payouts for whiplash and other soft tissue injuries are four or five times those in the UK.

He noted Lithuania, which doesn’t offer payouts for whiplash, has a very low rate incidence of such injuries.

He also criticised the slow progress of the Judicial Council Bill which, if passed, would allow judges to recommend guidelines for injury payouts. The bill has been sitting in the Seanad for 681 days.

“In the meantime, liability insurance premiums are soaring, fraudulent claims continue and insurance companies are reporting big profits. The only losers are the hundreds and thousands of community groups, charities and small businesses who are being crippled by increasing costs.”

He also raised concern about the lack of progress in setting up a dedicated Garda insurance fraud unit, another recommendation of the PIC.

There are proposals that the insurance companies would fund the operation of such a unit however Garda Commissioner Drew Harris recently said the Garda should only receive money from the exchequer.

Mr Justice Kearns said he was “baffled” that an insurance fraud unit has yet to be set up. “The frequency of exaggerated and fraudulent claims in this jurisdiction is now well known. There are daily reports in the media.”

He expressed surprise at recent figures showing gardaí have only been alerted to 20 cases of fraud since last August. He said he was “astonished to say the least” when he heard this figure as it doesn’t tally with Insurance Ireland’s claims that it has nearly 200 reports a year of fraudulent claims.

“And as we know, we’ve only had a handful of criminal prosecutions. That is very disappointing.”

The risk of being caught committing fraud is low and the risk of being prosecuted is “virtually zero”, Mr Justice Kearns said. “These are the maximum growth conditions for this problem.”

The PIAB presented research carried out by the Amárach polling company which showed about one third of people have suffered an injury outside the home, of which one third went on to make a claim.

Asked if there is a compensation culture in Ireland, 82 per cent of those surveyed agreed, with 84 per cent of those blaming high payouts as the reason. One third blamed advertising by solicitors and professional bodies while 25 per cent blamed media coverage of claims payouts.

Sixty two per cent said reform is needed but only 20 per cent were aware of the efforts underway to address the issue.