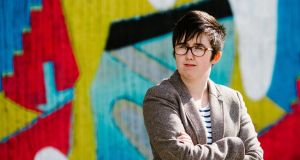 Journalist Lyra McKee: ‘Those who killed her claim they are fighting for Irish freedom. No. Lyra was doing that. Lyra personified Irish freedom.’ Photograph: Jess Lowe/AFP/Getty Images

Lyra McKee is dead. A beautiful young woman, brimful of life and love and creativity, has been sacrificed to the bigotry of people who could never in any imaginable circumstances be reconciled to peace. They say they are the true keepers of the republican flame, the defenders of the people of Derry.

But today the people of Derry are among those around the world mourning Lyra. We are angry and we are heartbroken. Lyra was only 29 and she was already a force for good, a superb writer, a passionate feminist and LGBTQ activist, and a wonderfully generous soul, full of compassion and encouragement.

Lyra had only moved to Derry recently but she was already a Derry Girl. She loved the place, and she had, as she put it, emigrated there from Belfast, to be with the love of her life, Sara. Already she was at the heart of the LGBTQ movement in the city. John O’Doherty, director of the Rainbow Project, recalled her dancing at a Strictly fundraiser. She was the first to admit she had two left feet, he said, but she gave it everything. She was, he said, a hero. And that is true in so many ways.

I can’t remember how we met. I think I may have contacted her to tell her how much I admired her “letter to my 14-year-old self” which had been made into a touching film. The piece is about being bullied at school when it got out that she was gay, and about coming out.

When she tried to tell her mother, she was sobbing so hard she couldn’t find the words. Her mother said, “Are you gay?” Lyra said yes, and “I’m sorry.” Her mother said, “Thank God you’re not pregnant,” and took her into her arms. Lyra said it was like being released from prison. She admired her mother and had cared for her for years. In a witty and moving TEDx talk she gave at Stormont a few years ago, she urged people to talk to gay people and also to those who had prejudices against them. “You could be saving lives,” she said.

We were to meet on Sunday. She’d messaged me: “Hi, lovely, you in Derry anytime soon?” I loved the easy way she showed affection. We made a plan and she signed off: “Epic.” Her last word to me. We would have talked about what was happening in Derry. I am sure that she would have felt keenly the waste of youth that was on display when she watched those young boys throwing petrol bombs and fireworks at the police. Her last tweet was dispatched from the side of a police Land Rover in Derry minutes before she was shot: “Derry tonight. Absolute madness.” Then the gunman emerged from the shadows.

We’d have talked about writing. She was sending me the drafts of the chapters in her new book and I was giving her some editorial advice, mostly to do with structure. (She helped me too – she knew so many people and I never knew a journalist so willing to share her contacts with those she trusted.) Her voice as a writer was unique and powerful.

Her new book was to be about young people who were “disappeared” during the Troubles, not those who are acknowledged as victims of the conflict, but others who got lost along the dark margins. She had already written about the shocking phenomenon of youth suicide in the aftermath of the conflict. She had a two-book deal with Faber and her essays had already appeared in some of the most prestigious literary journals. She was beyond chuffed when The Irish Times’ literary editor Martin Doyle recently listed her as a rising star.

Lyra was very serious and she was also seriously good crack. We’d also have talked about our planned “traybake crawl”, which was to be undertaken with Anton Thompson-McCormick and other giddy souls. She had been persuaded in Derry that Doherty’s did the best cherry scones. She had recently joined Slimming World and I’d laughed aloud at a tweet earlier this week in which she said going to meetings was like going to confession: “This week I confessed to Burger King, a brownie, a white chocolate, a large bucket of popcorn, a large coke, and a bag of Maltesers. My poor SW instructor was stunned into silence.”

With the greatest weariness of soul let us once again say, as so many who were bereaved in this bloody place over the years have said in their grief, she must be the last. Let us try to stop the absolute madness that took our sweet and brilliant friend. Farewell, lovely. Lyra McKee, our bright star, fallen.