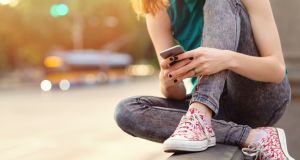 A 16-year-old girl told Childline she had sent images to a former boyfriend, who then shared them with others without her permission. File photograph: Getty

An increasing number of children are sharing self-taken sexually explicit photographs of themselves in chat groups such as WhatsApp, the Garda will warn on Wednesday.

The Oireachtas committee on justice is due to meet with gardaí, the Irish Society for the Prevention of Cruelty to Children (ISPCC) and other advocacy groups to discuss online harassment and harmful communications.

Gardaí are set to warn that explicit photographs taken by children are often circulated to third parties who may then use them to trap the child into engaging with them.

“Increasingly, children are engaging in the sharing of self-taken imagery where they send nude or sexually explicit personal photographs of each other, to other members of a chat group, utilising platforms such as WhatsApp or Instagram, or over social media such as Facebook or Snapchat,” gardaí will warn in their opening statement to the committee.

“While this scenario has given rise to a form of bullying, there is an added danger when images are circulated outside the confines of friends or otherwise become available to third parties, who may then use them as a trap to engage with a child or set up ‘fake profiles’, using the images as bait.”

The committee will hear that the gardaí are working to create web modules within the Garda schools programme to be delivered to all primary- and second-level schools nationally. The modules will include subjects such as cyberbullying, online harassment, consent and image sharing.

The ISPCC will also appear before the committee and call for an “age appropriate” legislative response to such harmful communications which would not criminalise those under 18.

“By their nature, children and young people do not have the maturity level of adults. They may exhibit a greater tendency to be impulsive and they may not fully comprehend the consequences their actions online may have,” ISPCC chief executive John Church is expected to say.

“In accordance with the UN Convention on the Rights of the Child, the ISPCC would not advocate that children and young people under the age of 18 be criminalised for their behaviour . . . Entry into the Garda youth diversion programme or similar may provide a more appropriate response.”

Mr Church will highlight examples of children who have been affected by online harassment, including the case of a 16-year-old girl who told Childline she had sent images to a former boyfriend, who then shared them with others without her permission.

“With these images now circulating widely, this girl told Childline she could not face going back to school and was contemplating suicide,” Mr Church is expected to say. “The ISPCC’s Childline service answers over 1,000 contacts every day from children. Many tell us about their experiences online.”

The Rape Crisis Network of Ireland will also appear before the committee and call for forms of online sexual harassment to be regarded as contact sexual offences.

“To us these forms of sexual harassment are a form of sexual violence and should be regarded as seriously as contact sexual offences. Their impacts on their victims are just as grave and potentially far reaching. Accordingly, we think it is appropriate to describe this behaviour as “image-based sexual abuse”.

1 Majority of Irish Covid-19 cases come from variant that originated in Spain – study
2 Postmortem results on mother and two children found dead in Dublin due on Friday
3 Cork shootings: Father and sons to be buried in two separate funerals
4 The real Contagion virus is out there and it’s causing virologists to worry
5 Sinn Féin senator and two party officials resign following Covid-19 grants controversy
Real news has value SUBSCRIBE