Molly Martens Corbett and Thomas Martens did not have fair trial, US appeals court told

In 2017, father and daughter were found guilty of murder of Irishman Jason Corbett 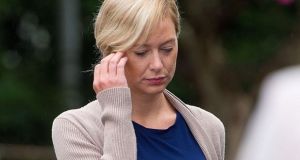 Douglas Kingsbury, attorney for Molly Martens Corbett (above), argued that statements given by Mr Corbett’s children should have been allowed at trial. File photograph: Donnie Roberts/The Dispatch

Molly Martens Corbett and Thomas Martens did not receive a fair trial for the murder of Irishman Jason Corbett, a court of appeal in the US has been told.

The attorneys for the father and daughter delivered oral arguments before a three-judge panel of the North Carolina court of appeals inside a packed courtroom on Thursday morning.

The standing-room-only crowd of nearly 150 people heard David Freedman, representing Martens, tell the judges he did not believe his client received a fair trial during the case that was heard in Davidson County, North Carolina in the summer of 2017.

Father and daughter, Thomas Martens and Molly Martens Corbett were convicted of second-degree murder in the death of Jason Corbett, a 39-year-old man from Limerick.

Martens, a former FBI agent, called 911 and told authorities on August 2nd, 2015 he struck his son-in-law with a baseball bat. During the trial in 2017, Davidson County prosecutors alleged Martens and his daughter beat Jason Corbett to death, administering at least 12 blows to the head, crushing his skull.

Detectives found Jason Corbett’s body inside his home in Meadowlands, a golfing community near Winston-Salem, North Carolina. Claiming self-defence, Martens testified Jason Corbett was choking his daughter, and he reacted to what he thought was some sort of disturbance.

The jury did not agree and the pair were sentenced to 20-to-25 years in prison.

On Thursday, Mr Freedman alleged Judge David Lee, who heard the case in 2017, excluded key evidence that would have corroborated his client’s claims. He said Martens’ state of mind was not taken into consideration.

One statement that was not introduced at trial, but was heard on Thursday, came from Michael Fitzpatrick, the father of Jason Corbett’s first wife, Margaret Fitzpatrick Corbett.

Ms Fitzpatrick Corbett, mother to Jason Corbett’s two children, died in 2006 from cardiac arrest stemming from an asthma attack. Her father, who has since died, signed an affidavit denying that he ever made that statement to Martens.

Nonetheless, Mr Freedman argued the statement spoke to the state of mind of his client but was not admitted.

Mr Freedman also argued that the jurors confessed to misconduct on the courthouse steps immediately following the trial and in a nationally-televised interview with ABC’s 20/20.

He said the jurors had no regard for what the court said and disobeyed instructions by Judge David Lee to have no conversation among themselves about the case. Mr Freedman contended Martens and his daughter did not have a fair jury.

Douglas Kingsbury, attorney for Molly Martens Corbett, argued that statements given by Mr Corbett’s children should have been allowed at trial.

He said statements made by the children indicated that Jason Corbett grew angry with his wife, especially during the middle of the night when she would sometimes change bed sheets for Mr Corbett’s daughter, who allegedly complained of being afraid.

Mr Kingsbury said the truthfulness of the children’s testimony could have been proven at trial.

Mike Dodd, a state prosecutor with the North Carolina attorney general’s office, said he was baffled as to why the case was tried as second-degree murder. He believed it could have been tried as a first-degree murder case, saying it appeared to him to have enough evidence to be tried as such.

It was strange, he said, that prosecutors elected not to charge Martens and his daughter with first-degree murder, which carries a possible life sentence in the US. Prosecutors must prove in first-degree murder cases, however, that the perpetrators’ crimes were premeditated.

Tracey Lynch, Jason Corbett’s sister, her husband David and members of the Jason Corbett family flew to Raleigh, North Carolina for the hearing, which lasted approximately an hour. Members of the Martens family were also in attendance.

It is expected to take months before the North Carolina court of appeals issues a decision in the case.