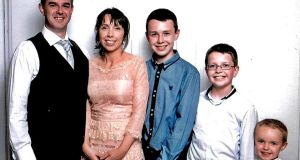 Minister for Justice Charlie Flanagan is due to meet on Thursday with the mother and sister of Clodagh Hawe, who are seeking more information about how she and her three sons were murdered by Alan Hawe before he took his own life.

They want a full inquiry into the four murders in Ballyjamesduff, Co Cavan, in August 2016.

The Department of Justice has said any “proposals” that Ms Hawe’s mother, Mary Coll, and sister, Jacqueline Connolly, had to make would be considered by the State.

Any ideas they put forward, relating to their own case or domestic murders generally, would be reviewed by officials from the department as well as criminal law experts and the Attorney General.

However, Mr Flanagan said during his time as Minister much work had been done to help prevent domestic violence and to aid victims.

“The murder of Clodagh and her beautiful sons was a horrific act of violence which shocked and saddened everyone in the country,” Mr Flanagan said, addressing his sympathies to the dead woman’s family.

“I would be happy to meet with them to discuss their proposals and to assure them that I am totally committed to doing everything I can to address and prevent the crime of domestic violence.”

Speaking later on RTÉ’s Prime Time on Tuesday night Mr Flanagan added: “These are crimes against the essence of humanity. I’m very keen to help. I spoke to the Coll family today, I hope to meet them on Thursday.

“I’ll talk to them about any possible inquiry on Thursday. I’m not sure what the nature of the inquiry will be or if it will be a commission of investigation or a full public inquiry. I do know the gardaí have papers in the circumstances that will be useful. I have no idea if the HSE or the INTO were involved or the school.

“It’s difficult for me to answer specific questions on a case when I haven’t even met the family but I am going to meet them and answer their questions insofar as I can,” he said.

Ms Coll and Ms Connolly say they are left with questions that they want answered. They have rejected the characterisation, in expert evidence at an inquest, of Alan Hawe as suffering from psychosis.

Ms Coll and Ms Connolly believe the Garda and Alan Hawe’s employers have information that could answer some of their questions. But they say they have been denied access to the information.

However, Ms Coll and Ms Connolly are seeking information from the school that employed Hawe in order that they might understand more fully the events preceding his murdering his wife and three sons.

The murders, followed by Alan Hawe’s suicide, occurred on the day before he was due to return to work after the summer holidays.

Ms Coll and Ms Connolly have described Hawe as “evil” and have contended he made a decision to take his own life because he was facing a “showdown” in school. They contend he was controlling and that murdering his wife and sons just before he took his own life was part of the abusive control he exerted over his wife and sons.

Ms Coll and Ms Connolly said in an interview on the Claire Byrne Live show on RTÉ on Monday night that Alan Hawe had conflict with a work colleague, had contacted teachers’ union the INTO and in his suicide letter was concerned that “the truth was going to come out”.

Ms Coll said her daughter confided that her husband told her he had been watching pornography and he went for counselling.

Ms Connolly said the family believed he was “avoiding the consequences of something he was doing at work. “He rang the INTO, we don’t know why, whether it was for a grievance or whether it was for representation. We know that he had conflict with a colleague.”

In a statement on Tuesday night the INTO said it sympathises with the family, school colleagues and all those affected by “this unthinkable tragedy”.

“As a professional advisor, INTO provides advice and guidance to our members on a wide array of professional issues pertaining to their employment. Provision of any such advice is provided with an assurance of strict confidentiality.

“INTO fully complies with, and takes seriously, all of our legal obligations,” it added.

They also complain that a “blanket of depression” was thrown over the inquest but insisted this could not explain away the murders of the mother and three sons. And they have pointed out the mental health expert who told the inquest Hawe was depressed and psychotic had never met him or anyone Hawe knew.

Prof Harry Kennedy, clinical director of the Central Mental Hospital, was asked by the coroner to review any available medical and counselling notes relating to Alan Hawe; performing what is known as a psychiatric autopsy.

Prof Kennedy said when all of the notes available – from the GP and counselling sessions – and suicide notes or letters were reviewed together, it was clearer Hawe was psychotic.

This would normally take the form of an imagined impending catastrophe from which he would not recover.